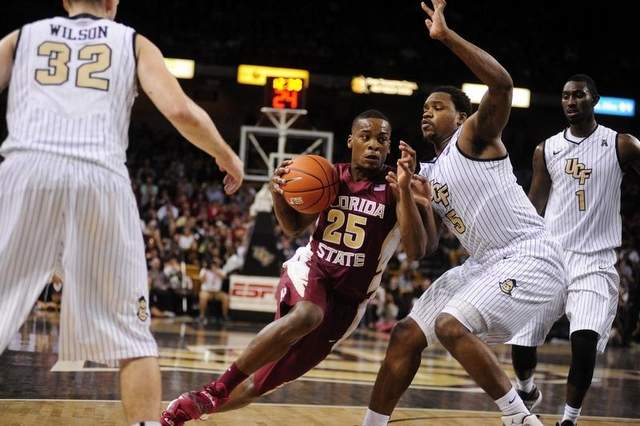 Florida State (2-0) travelled to Orlando on Wednesday and took out the UCF Knights 80-68 behind a strong defensive outing and 17 points and five assists from Devon Bookert.

The Seminoles took a 38-33 lead into halftime but the Knights (1-1) managed to get within two shortly into the second period. The Seminoles took over after that though, senior forward Okaro White accounted for seven points during a 13-3 run and FSU started to pull away. It was 62-45 by the ten minute point in the second half.

UCF wasn't done though, the Knights fought back furiously and made it a single digit game late in the second -- but it was too little, too late. FSU had more than enough on Wednesday night to hang on and pull out their second win of the young season.

Ian Miller lead the Seminoles in scoring with 18 points on 5 of 13 shooting. White finished with 13 and Robert Gilchrist added ten.

With Kiel Turpin still out, Boris Bojanovsky made the start at center, but FSU opted to go with a smaller grouping for most of the game. Bojo and Michael Ojo combined for just 19 minutes.

The real story was FSU's defense though. After a bit of a down year last season (a result of youth and inexperiece), Leonard Hamilton's junkyard D looks to be on its way back. The Seminoles held the Knights to under 40% shooting for the night, forced 20 turnovers, got 11 steals, blocked 10 shots and won the battle on the glass.

Next up FSU faces Tennessee-Martin at home on Sunday. The Seminoles will wear bright turquoise Nike N7 uniforms in honor of Native Americans.