Montay Brandon Playing For More Than Just Himself This Season 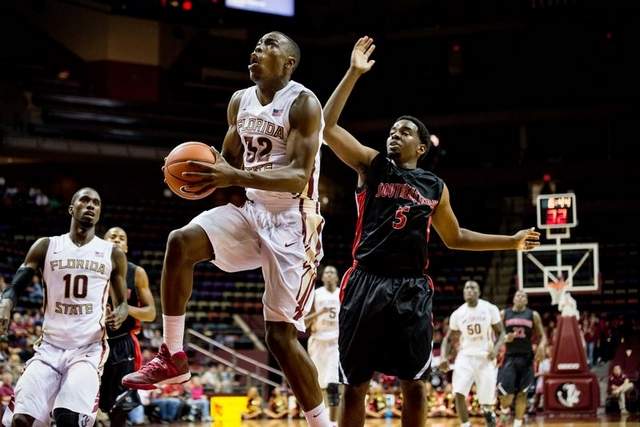 It was late on the evening of February 19th. Montay Brandon had his head ducked low in a visiting locker at NC State. Florida State had just lost 84-66 and Brandon was checking his phone to get his mind off going scoreless that night and the fact his team had now lost six of its last ten.

Then he saw the tweet. Josh Level was dead.

Brandon couldn’t believe it. The two had kept up with one another all season -- but they hadn’t spoken in two weeks. Now Montay was less than an hour and a half from where he’d grown up in Greensboro, NC -- where he’d know Josh since he was nine years old -- yet he couldn’t have been further away.

“We had to come right back,” said Brandon, who boarded a plane that night and headed back to Florida State with his teammates. “It was [a difficult flight], it really was.”

Level died of Myocarditis, a viral infection -- not unlike a cold -- that attacks the heart. The 17 year-old was playing a high school game for New Gardens Friends School on the road in Winston-Salem when he collapsed during a timeout. He was taken to a hospital, but could not be resuscitated and was pronounced dead.

Montay was left grief-stricken, unable to even attend the funeral.

"I stayed here in Tallahassee, I talked to his parents and told them I’d have them in my prayers and everything,” recalled Brandon. “I don’t know if I’d have been able to handle it, it would have been pretty tough.”

Josh had been two years younger, but -- whether or not Montay had ever told him -- Level’s work ethic had been an inspiration to him.

“Josh is somebody that worked really hard, he was one of the players that wasn’t as good at first and he developed his game really hard,” remembered Brandon. “Me and him would be in the gym together like every day during the Summers, so he became sort of like my little brother.”

“He was a hard worker, tireless worker, played hard, competed in everything,” said Brandon. “I mean he just wanted the same opportunity to play college ball.”

He never got that opportunity.

But this season -- and for the rest of his career -- Brandon plans to honor him by wearing his number, 32. It will be a constant reminder of Level’s drive and determination.

“While I’m out there and I have that jersey on I won’t take anything for granted,” said Brandon. “I’ll play hard the whole time, no plays off, just to represent him in that way and just show like -- his thing was hard work, you could do anything through hard work -- so I want to do that too as well.”