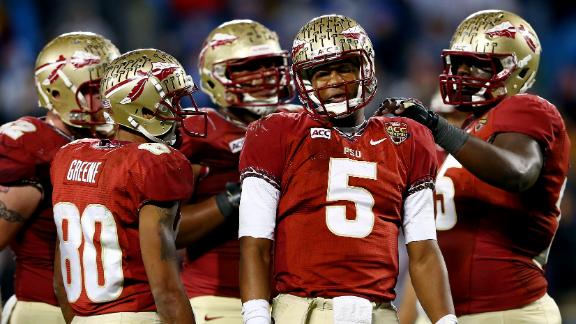 Here are five things to watch for when Florida State and Auburn square off for the final BCS Championship later tonight.

No player has played a bigger role in the resurgence of Florida State over the past four years than Lamarcus Joyner. He helped cobble together one of the top recruiting classes in FSU history when he was still a senior at Ft. Lauderdale St. Thomas Aquinas, after starting for two seasons he made the decision to return to school after last year's Orange Bowl and he has been one of the defensive leaders as the Seminoles transitioned into a new system under Jeremy Pruitt.

If FSU wins a national title tonight no player will have been more directly responsible for it than Joyner. That's why it's probably appropriate that should FSU win tonight, Joyner will have to stand and deliver one last time for the Seminoles. Auburn's rushing attack oftentime comes out of a multi-receiver set to try to exploit the defense having extra defensive backs on the field -- the nickel corner usually being a key target.

If FSU is to stop Auburn's vaunted rushing assault, Joyner is going to need to be assignment-sound and extremely physical -- just as he has done all year. If the senior DB is up to the task, Auburn will struggle to establish itself like it wants to in the early going. That could make all the difference.

If Auburn is going to beat Florida State is has to prove it can win the battle in the air early on. FSU knows what Auburn's bread and butter is and the Seminoles will be hell-bent on trying to stop it. That means FSU is likely to leave its corners and safeties in a lot of single coverage to try to free up extra men to go play in the box. That is, if Nick Marshall can't prove early on that he can beat that coverage and throw on the Florida State secondary.

How amped is Jameis Winston at the start of this one? He came out over-hyped against Duke and threw two early picks. He also came out too excited to play Miami and he threw two early interceptions. This is the biggest night of Winston's life, how does the redshirt freshman handle this game?

A lot has changed for Jameis in the past month. The ugly allegations against him were lifted, he won a slew of awards including the Heisman trophy and his national profile is flying higher than it's ever been. Did he read his own press clippings? Will he fall victim to the Heisman curse? Or will this be the same Jameis Winston fans were used to all year?

Here's something nobody ever mentions: Mario Edwards was hurt the day Boston College ran all over FSU. As in, he didn't play a snap. Since then Edwards has been healthy and the Seminoles haven't trailed again all year. Edwards was asked a lot about that BC game in the weeks leading up to tonight. He answered all the questions graciously, but it wasn't hard to tell he was irritated answering for mistakes he didn't actually make.

Tonight, he'll have a chance to show how much of a difference maker he really is. Edwards is more of a bull-rusher when it comes to getting after quarterbacks, some have even questioned whether he is an elite pass rusher. What nobody questions is how he stacks up against the run -- in that regard he's one of the nation's best. If Edwards has a big night stuffing the Auburn rushing attack, then you should look for him atop draft boards come the start of next season.

It's come up all aces this year for Florida State and Jimbo Fisher. Fisher replaced 11 draft picks and half of his coaching staff last season and seemingly every move he made paid off huge. Jeremy Pruitt took over for defensive coordinator Mark Stoops and installed a monster of a defense, bringing along late recruiting flips Jalen Ramsey and Demarcus Walker -- both impact freshmen -- on the way. Jameis Winston replaced EJ Manuel to the tune of a school record for touchdown passes and a Heisman trophy.

And after getting over the proverbial hump and winning all the games he was supposed to (and a couple the Seminoles weren't expected to) Fisher himself received a hefty contract extension from FSU.

Now all he has to do is beat Auburn, and that means calling a good game tonight.

In the past Fisher has shown a tendency to get a little wide-eyed at key moments and the play-calling has suffered. If this year is any indication though, that trend is a thing of the past. Take for example the Duke game when FSU's offense was struggling against a very well-prepared Duke defense. In the past Fisher may have kept hammering that square peg into the round hole. Instead, he broke tendency and ran an option look for the first time all year. It worked. It put Duke on its heels and FSU broke the game wide open.

Fisher will need to show the ingenuity tonight too. If he does, FSU should be in a good position to claim their third national title.