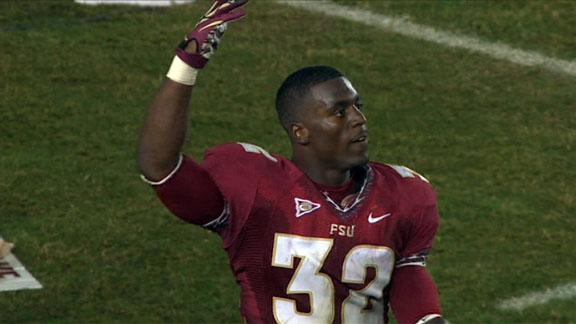 Florida State running back James Wilder Jr. has decided to forego his senior year and enter the NFL draft according to a post on the junior running back's Instagram account.

"I wanna first thank GOD my family the whole nole nation and nole fam my brothers my coaches for being able to put me in a blessed situation to be able to continue my dream on to the next level and being able to enter the NFL," the post reads. "I had the best 3 years of my life being a nole and will always be a nole at heart that being said GO NOLES!!!!!"

Wilder carried the ball 81 times for 563 yards and eight touchdowns during the Seminoles' national championship campaign. He also caught three passes for 21 yards.

At 6-2, 230 Wilder has the kind of size and above average speed that should find him a nice home in the NFL. Questions about his upright running style and vision are likely to come up during the pre-draft process but between his size and NFL pedigree the Tampa native is likely to go in the middle rounds of the Draft. NFLDraftScout.com currently has Wilder listed as the 12th best eligible back in the country and projects him as a fourth or fifth round pick.

Wilder's father, James Wilder Sr., played in the NFL for a decade (mostly with the Tampa Bay Buccaneers).

Really, this isn't a very surprising move. Wilder's carries were already diminished after Jimbo Fisher switched Karlos Williams from safety to running back following the Pitt game. Williams finished with 730 yards and 11 touchdowns this year and should see the lion's share of the carries come next season when he's had an entire Spring and Summer to really pick up the nuances of his new position.

Devonta Freeman -- who became the first 1,000 yard rusher at FSU since Warrick Dunn during the BCS Championship game -- could also return for his senior season. In addition, Ryan Green and Mario Pender could challenge for more time next year and highly-touted Miami Central recruit Dalvin Cook is set to enroll early and participate in Spring practice as well.

All in all, this was probably the right move for Wilder -- who could actually see more carries next year in the NFL than he would during his senior season at Florida State.

Wilder finishes his career at Florida State with 1,358 rushing yards and 20 career touchdowns.