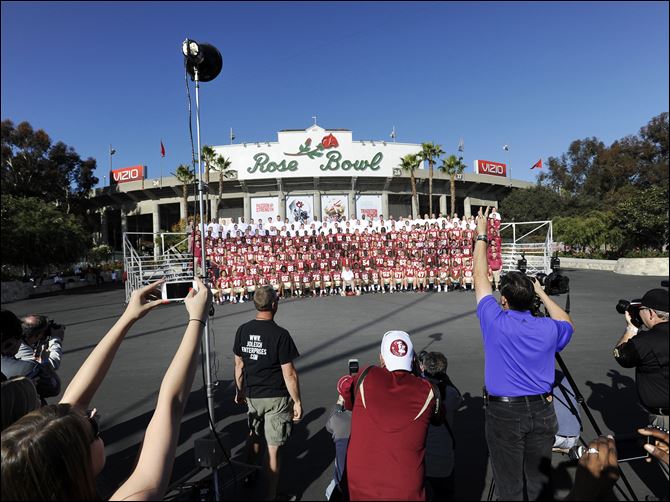 It's here. Kickoff is in just a few hours and the Auburn Tigers and Florida State Seminoles are set to play for the last BCS Championship that will ever awarded.

FSU is lead by their Heisman trophy winning quarterback Jameis Winston and the top defense in the country. Early on this season it was all about Winston's prolific passing numbers and eye-popping highlights. As the year progressed though, Jeremy Pruitt's defense started to steal the show. By the time FSU had put away the ACC title game against Duke, there was little doubt that the '13 FSU defense belongs with the best in the program's history.

If it can stop Auburn tonight, it will stake its claim as THE best (with plenty of good debate to follow).

Florida State needs just 28 points tonight to set a new NCAA record for points in a season. They also have a chance to join the ranks of the elite if they can win by a couple of scores.

Only three teams have ever won all their games by 14 or more points. 1995 Nebraska -- considered by many to be the greatest college team of all-time -- and 2004 Utah. The Utes' accomplishment, though still noteworthy, is a bit less impressive when you consider the best team they faced that season was an 8-3 Pittsburgh team in the Fiesta Bowl. If FSU can win by more than 14 tonight, they will join Nebaraska in the conversation as one of the greatest teams in college football history.

That's still a tall order for the 'Noles though. Auburn brings a fierce rushing attack and a defensive front that can cause problems. FSU may be favored, but the Tigers are more than capable of the upset if the Seminoles' minds aren't right.

How will things play out? We will see shortly...

Keep checking back throughout the night for coverage of the BCS Championship Game.

Previewing the Opponent
Five Things to Watch For
Injury List