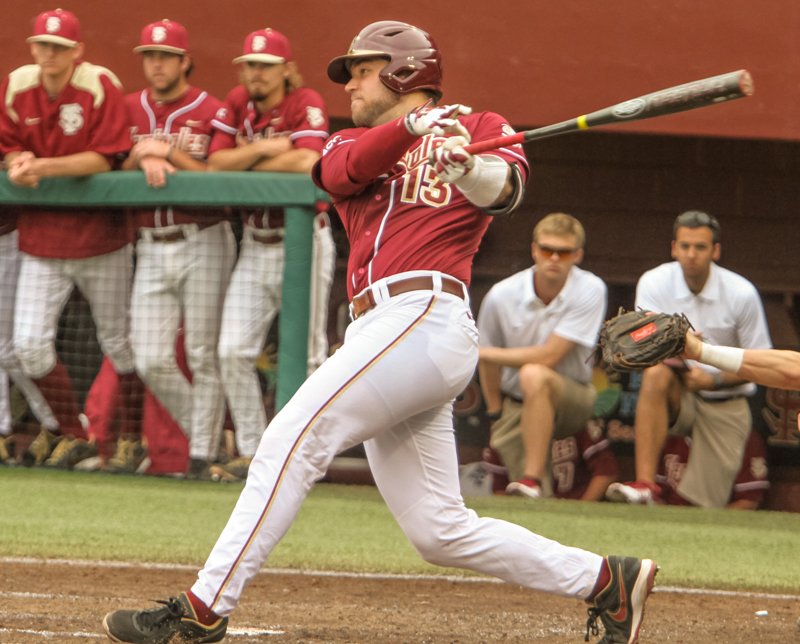 As the old saying goes, 'patience is virtue.' And that's never more true than in baseball -- especially on a night when the bats aren't hot.

As the Florida State Seminoles (5-0) played host to the Georgia Bulldogs (1-4) for the first of a three game series on Friday night, that's exactly where FSU found itself.

On a night when the bats never really got on track for Florida State, the Seminoles were able to use excellent plate discipline to draw walks, move base runners and score runs in an 8-3 win over the Bulldogs -- all despite being out-hit by Georgia 10-8.

FSU used a six-run fourth inning to break a 1-1 tie and take control of the game on Friday. Brett Knief lead the inning off by getting plunked before Georgia starter Ryan Lawlor issued three straight walks to put the Seminoles ahead 2-1.

That would mark the end of Lawlor's day, but not the end of his line. David Sosebee replaced him on the hill and quickly walked in another run. Danny De La Calle followed that with a two-run single to make the score 5-1. All five of those runs were charged to Lawlor.

FSU continued its fourth with a Josh Delph sacrafice fly to plate its fifth run of the inning, then a wild pitch and a balk helped the Seminoles score their sixth run on a Knief single up the middle.

By the end of the frame the Seminoles had scored six runs despite getting just two hits.

"You can look at that inning and certainly know that was the key to the ballgame," said FSU head coach Mike Martin.

Junior RHP Luke Weaver (2-0) was good enough to get Florida State the win, but hardly looked to be in mid-season form. A week after holding Niagara without a hit or run in his 2014 debut, Weaver looked very human on Friday night, scattering eight hits and three earned runs across five-plus innings of work.

"I felt good, I felt like [with] the fastball I was pounding it, the change up was better than it's been in a while," admitted Weaver after the game. "This team, I mean my hats off to them, it's just one of those days when you throw good, I felt like I was throwing it well and they were just getting hits."

Jess Posey, the younger brother of FSU's last Golden Spikes winner, Buster Posey, proved a worthy nemesis for Weaver. The sophomore 3B was 3-3 against FSU's ace -- including a sixth-inning two-run homer that knocked Weaver from the game.

"Next question," joked Martin, when asked about Posey's performance against FSU. "He was really impressive. There's a spot in my heart that says, 'nice going.' But Luke Weaver would be the so-called recepient so therefore it's hard for me to do anything but tip my hat. He did a great job."

Added Weaver: "He had my number the whole night. Hat's off to him."

Billy Strode replaced Weaver in the 6th and struck out the side on his way to 1.2 scoreless innings pitched. He was replaced by Gage Smith with two outs in the top of the 7th. Smith stayed on to work a scoreless 8th and -- after the Seminoles added an insurance run in the bottom of the 8th -- stayed on to wrap up the 9th too. He finished his night with one hit and no runs surrendered and struck out two over 2.1 innings pitched.

FSU hosts Georgia against tomorrow at 2 PM and then again on Sunday at one.