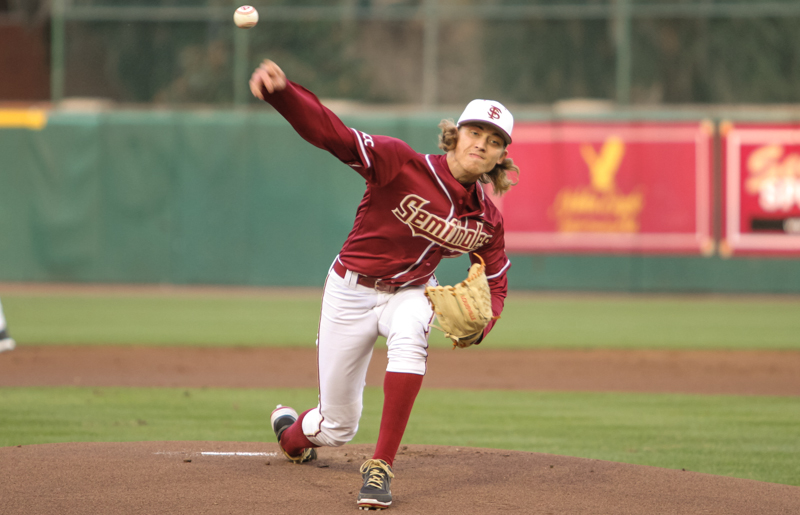 Sophomore left-fielder DJ Stewart lead the offense with a career-high four hits and pre-season All-American Luke Weaver was superb on the mound as Florida State opened its season with a 13-2 win over Niagara on Friday evening in Tallahassee.

"The first batter and the first pitches of the season are tough to overcome emotionally," said Weaver. "I just battled through it all."

Despite the nerves, Weaver was nearly perfect for the Seminoles in his 2014 debut. After walking the first hitter he faced, Weaver buckled down to retire the next 16 consecutive batters.

"Can't say enough about how Luke pitched," said FSU manager Mike Martin. "No-hitters are something you don't think about until you get to the fifth inning and the other club doesn't have [a hit]. We knew he was only going to go close to 90 [pitches] and I think he ended up with [89]."

Weaver finished the day after six innings -- leaving with his no-hitter in tact. The junior struck out seven, didn't give up a hit or run and allowed just two baserunners to the Purple Eagles.

Offensively, Stewart had little trouble shouldering the load for the Seminoles, going 4-for-5 with two doubles, an RBI and two runs scored.

"[DJ] is a heck of an athlete, you know he as a football player also in high school," said Martin. "He's just a guy that's turning into an outstanding leader. He got more hits tonight than I used to get in a week. He had a heck of a night."

In the first Stewart doubled in Josh Delph to put the Seminoles ahead early and then helped Florida State add to its lead by doubling and scoring on a Jose Brizuela infield single during a two-run third inning.

Brizuela ended the day 2-for-3 with two RBI's. Redshirt senior Justin Gonzalez -- back after missing last season with a hip injury -- also drove in two for the Seminoles and junior DH Josh Delph doubled twice from the leadoff spot.

Junior LHP Billy Strode replaced Weaver at the top of the seventh and promptly got himself into a bases loaded jam. After retiring the first batter of the inning Strode surrendered a one-out double to Niagara 2B Michael Fuhrman, walked LF Joel Klock, hit 1B Greg Rodgers with a wild pitch and then walked CF Taylor Hackett to plate the first run of the ball game for the Purple Eagles.

Senior RHP Gage Smith came in to close out the inning, striking out a hitter before picking off a base-runner at second -- though Niagara did score for the second time in the inning during the run-down.

That was as close as Niagara got though. Florida State doubled its lead in the bottom of the 7th inning after control problems started to plague the Niagara bullpen.

If Niagara didn't have its best stuff, that's probably attributable to the brutal path the team was forced to take to Tallahassee. Due to inclement weather the Purple Eagles had to first bus to Pittsburgh, then fly into Houston, take another flight to New Orleans and then bus to Tallahassee. Niagara didn't even make it to its hotel before arriving at Dick Howser Stadium.

Niagara starter Jordan Schwartz still pitched valliantly, scattering nine hits and five runs across 5.2 innings pitched. Unfortunately for the Purple Eagles, after climbing to within three runs in the top of the seventh the bullpen couldn't keep it close and the fifth-ranked Seminoles rolled late.

Smith pitched a scoreless top of the 8th, and -- after Jameis Winston walked and scored a run in the bottom of the inning -- Brandon Johnson came on and pitched a [finish].

FSU hosts Niagara again tomorrow afternoon at 2 PM and on Sunday morning at 11:30.