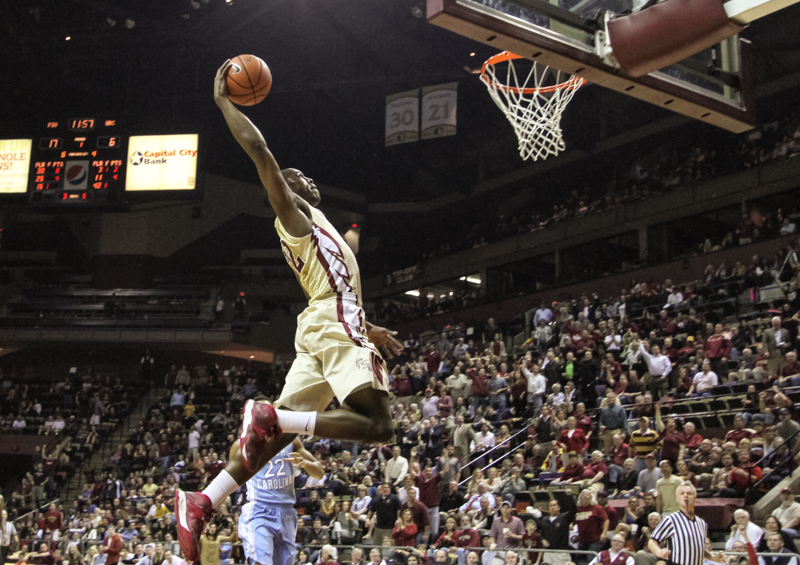 The Seminoles came into the game on the proverbial bubble and needed a win to bolster their resume.

Things started off looking good for Florida State too. Ian Miller provided the early spark for the Seminoles. Making just his first career start, the senior guard provided 11 first half points and helped Florida State build a 15 point, 21-6 lead in the early going.

"The first timeout, when I called it, I didn't do any coaching I just screamed at them -- I thought that's what they needed," said UNC head coach Roy Williams, who picked up his 300th career ACC win on Monday.

Despite starting cold the Tar Heels were able to hang around long enough for the Seminoles' big men to get into foul trouble. While UNC struggled on the boards at the outset, Okaro White, Michael Ojo, Robert Gilchrist and Boris Bojanovsky all had multiple fouls in the early going. That forced FSU head coach Leonard Hamilton to shift to a smaller rotation and UNC gained the edge in the paint.

"For us to lose our most experienced senior player was probably a little more challenging than it might have been if we were in another circumstance," said Hamilton, who admitted the team is too thin to weather foul trouble -- especially with regards to its big men.

UNC outrebounded the Seminoles 42-32 over the course of the game and took the definitive advantage in the second half when they caught fire from the field. Lead by guard Marcus Paige, the Tar Heels shot 67.9 percent after halftime and managed to put the Seminoles away over the final five minute of regulation.

"In the second half Marcus’ teammates started looking for him and he got this look in his eye and started making a bunch of shots," said Williams.

After scoring just 4 first half points Paige heated up and scored 16 -- including a stretch where he hit three 3-pointers -- in the second half.

Said Hamilton: "We just never recovered from that."

For Florida State, Miller lead the way with 22 points, Montay Brandon had a career-high 18 and Aaron Thomas finished with 16.

After playing two games in three days for the second time in ten days, the Seminoles will now get a bit of a rest. FSU next plays on Saturday (Feburary 23rd) at Pittsburgh before hosting Georgia Tech on March 2nd and visiting Boston College on March 4th.