Let's take a trip around the Southeastern Conference and see how the other guys faired on National Signing Day. For the next couple of weeks I'll analyze the recruiting class from each school in the SEC. Check back and find out all the interesting information I've uncovered about the Gators' competition...Part 2 in an 11-part series.
Previous tour stop links (CLICK THE SCHOOL): Auburn.

GAINESVILLE -- After taking a day off from the road (had to make a detour and cover the Gators' basketball game on Saturday), the recruiting tour bus wheeled into Tuscaloosa, Ala., on Sunday morning and found the place hung over from a three-day bender. The folks in T-town have been

partying nonstop since coach Nick "I Took a Pay Cut" Saban offered the Crimson Tide faithful (and they have certainly been faithful) one of the best recruiting classes in the nation. As they say in the Yellowhammer State, stars fell on Alabama. (Sorry, couldn't resist. Click on license plate tag for an explanation.)

Alabama's recruiting efforts have been limited for the last 15,000 years after the NCAA uncovered one of the biggest scandals in college football history. Does the name Albert Means ring any bells? NCAA sanctions, heavy handed to be sure, reduced the mighty Alabama football program to a shadow of its former self. Alabama hit rock bottom in 2007 after finishing the regular season 6-6. It appears the Tide finally has begun the long road back to respectability with a promising recruiting class in 2008. Capstone brass paid Saban $4 million per to resurrect the program. The investment appears to be paying off.

Missed out on: Hoover, Ala., defensive end William Green chose the Florida Gators over the Crimson Tide. He shied away from the Tide because Alabama received four early commitments from other top-rated defensive ends. Green told me he picked the Gators because of the depth chart and, "Coach Meyer was honest the whole time."

Sleeper: DE Undra Billingsley (6-4, 260 pounds, Birmingham, Ala.) The best high school prospect out of Woodlawn High since former Auburn and current Arizona Cardinals linebacker Karlos Dansby. Billingsley needs to add some muscle to his frame but when he does, this defensive end will be a major force in the Southeastern Conference. While Billingsley may take a year to contribute on the field, his leadership will make an immediate impact. Billingsley graduated Woodlawn with a 3.95 GPA. (FYI: Bobby Bowden graduated from Woodlawn, but that was back when they were still mining iron ore out of nearby Ruffner Mountain.)

Tallahassee North Florida Christian). Alabama didn't get many kids out of the Sunshine State but the two Saban did pull are top-notch athletes. Star Jackson, PICTURED, is the Crimson Tide's quarterback of the future (Maybe the near future; Oh, boy, I can already see the headlines now). He throws a pretty ball, can complete the touch pass and, while he's considered a pro-style quarterback, has the ability to scramble for a first down. Jackson's only downside: He didn't play organized football until he got to high school. He'll probably take a few years to develop.

but the coach certainly earned a bear hug from his fan base after reestablishing Alabama as the premier in-state destination for in-state recruits. Alabama hasn't beaten Auburn on the field in awhile but Saban and his staff -- despite the loss of offensive coordinator Major Applewhite to Texas -- whipped Auburn coach Tommy Tuberville in the race for homegrown talent. The Crimson Tide signed more than twice as many in-state prospects (19) as Auburn (nine). Topping that list is receiver Julio Jones of Foley, Ala. Jones flirted with Florida but in the end said he felt more at home in Tuscaloosa. Jones' commitment was no surprise. The receiver has been visiting the University of Alabama unofficially for some time and is no stranger to the Crimson Tide's weight room.

Impact freshman: There are quite a few but Gator Clause will focus on Mark Barron, perhaps the most gifted athlete of this preposterous signing class. Barron prepped at Mobile St. Paul's and led the private school to an unlikely state championship. The thing about St. Paul's season: Barron pretty much did everything -- running back, receiver, safety, kick returner. Tuscaloosa hasn't seen a more well-rounded athlete of Barron's caliber since David Palmer. (Not saying Barron will be as good as Palmer, just saying...) Barron could start somewhere in the secondary next season for the Crimson Tide. (Miami Dolfans all know how Saban likes his defensive backs.)

Tables turning in Alabama The Beautiful? Tuberville, dust off your resume. Nah,

just kidding. Tommy is safe ... at least for one more season. Alabama might have had a great recruiting class but, hey, it's just recruiting. Last time I checked, that loss to Louisiana-Monroe is still on the 2007 schedule. As long as Auburn continues to win on the field, the Tigers still own the state of Alabama. All jokes and hyperbole aside, folks all over Alabama should be happy the Pachyderms are finally regrowing their tusks. Coming soon to a city-sized football stadium in Alabama: An Iron Bowl that might actually mean something. How long has it been? 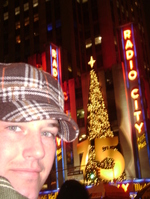 My Miami Herald collegue, Dan LeBatard, might disagree, but Nick Saban is not the Antichrist. No, Saban is just a guy who sold his soul to the devil for the easy life of college football. Back in the minor leagues, Saban is doing all the buying now (err...metaphorical buying, I mean). He accomplished more this recruiting cycle than most coaches do in three. How long can he keep it up? Press the play button on this podcast and find out what Joe Goodman, PICTURED, has to say.

Next up: The tour bus drives west from Tuscaloosa, Ala., to Starkville, Miss. (Check back on Monday, guys. Taking a trip to St. Augustine today. Surfs up.) Distance from Tuscaloosa to Stark Vegas: 82 miles. Total miles logged: 439 miles. Schools covered: Auburn and Alabama.