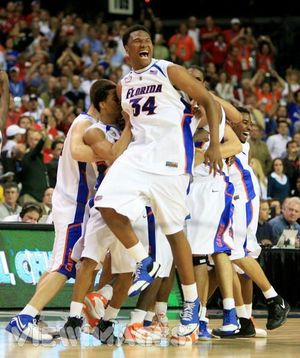 "I want to thank my family and the Gator basketball staff for helping me be in a position to be picked 16th by Philadelphia. I look forward to working extremely hard and developing into the best player I can become," Speights said. "I know this won't be easy but I am ready for the challenge."

What's more remarkable: Speights being selected in the first round or six -- That's right, SIX! -- Gators being drafted by NBA teams in the last two years?

Here's a better question. Will the streak of Gators being drafted continue next season? Like Speights, Will Nick Calathes go pro after his sophomore season? Calathes is in Athens this week trying out for the Greek Olympic basketball team. Calathes is expected to make the team but the Greeks will have a tough road to qualify for the Beijing Games. Here's request to the Greeks. Please teach Calathes how to dunk.