OK, THE BRAIN TRUST here at Gator Clause is finally getting around to picking up the preseason college football mags. We're looking at four mags this morning -- all laid out on the floor -- and Tim Tebow is staring up from three of them. Cost me a bunch of dough. Or one Dustin Doe. (That's $32.)

GAINESVILLE -- If the prediction polls in the preseason college football magazines are correct, then the hype surrounding the annual rivalry game between Florida and Georgia will be intoxicating once November roles around.

Put it this way. If Florida at LSU (2007) was one big keg of beer (and it was, even in the press box), then the Cocktail Party in 2008 will be shots of pure grain alcohol.

Two preseason mags -- Athlon and Phil Steele's -- have the Gators No.1 in the country. The other two mags -- Lindy's and Sporting News -- have Georgia No.1. Sounds like a showdown in Jacksonville, folks. Hopefully it won't rain like last year.

A few more observations from the mags...
1. Phil Steele must be the world's loneliest man. Also, Steele ranks USF (No.8) ahead of Georgia (No.9).

2. Steele's magazine prints different covers for different parts of the country. There's thumbnail examples of nine covers on the back of the mag I'm looking at. There's apparently a Florida cover with Tebow and Percy Harvin running play-action. For some reason, I have the Alabama cover. (Two fat linemen -- Bama's Andre Smith and Auburn's Lee Ziemba -- are on the cover.) I bought this magazine in the Gainesville Books-A-Million on 13th. Go Figure. 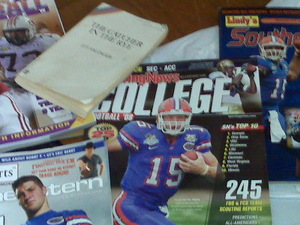 3. If you count Phil Steele's Florida cover and national cover, then Tiny Timmy is on five covers -- Steele's, Lindy's, Sporting News and Athlon.

4. Do Miami and Florida State even exist anymore? Not according to these preseason mags. For some reason, I don't think the 'Noles and 'Canes need any more motivation against the Gators.

6. The best page of all four mags: There's an Altoids add on page 9 of Athlon that's making me laugh. The "curiously strong mint" apparently, "Awakens like a horse whip on the backflesh."

7. USF defensive tackle George Selvie does not get enough love. That guy might be the best college football player in all of Florida.

8. You know how they say Southerners fry just about anything. Well, these silly mags rank just about anything. Athlon actually decided to rank the new coaches of 2007 (last season). Nick Saban is ranked No.8. That seems like a pretty high ranking for a guy that makes $4 million per, went .500 in the conference, finished 7-6 on the year and lost his final four regular-season games, including one to La-Monroe. 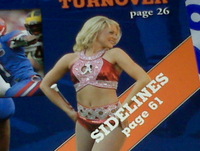 9. There's a dancer on the cover of Lindy's that has a scarlet letter 'A' on her chest. That's a bit damning, if you ask me. Sounds like a lawsuit.

10. Something that has always killed me about Tim Tebow, the guy's got no earlobes. Seriously, his ears are just fused to his head like a bat or something. Athlon's cover gives you a good shot of this. My theory has always been that Tebow is a demigod and therefore genetically superior to the rest of us. His ears are streamlined to reduce drag. I think God made it where Tim could play football without a helmet. Here's my preseason prediction: Tim gets his helmet knocked off by an Ohio State lineman on the last play of the game of the 2008 BCS national championship game in Dolphin Stadium, but then Tebow runs for a game-winning touchdown with no helmet.