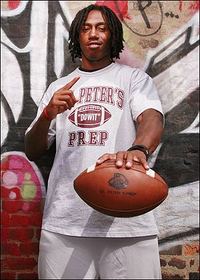 GAINESVILLE -- Free safety Will Hill is No.4 on our list of top five newcomers who could receive significant playing time this fall.

A New Jersey prep sensation, Hill starred as a quarterback in high school but is making the permanent switch to defense when he arrives in Gainesville in a few weeks for Summer B. Hill's opportunity to contribute immediately improved dramatically when Florida coach Urban Meyer was forced to kick Jamar Hornsby off the team.

With the loss of Hornsby, Florida's coaching staff is already penciling in Hill as a back-up to Major Wright at free safety. Ahmad Black is another name that has emerged as a possible back-up at the position.

Hill will be an immediate starter on several of Meyer's special

teams units. Most likely kickoff and punt coverage. A little trivia: Hill will be the second UF defensive back who starred as a quarterback in high school. Starting cornerback Joe Haden also played quarterback.

If you're looking for comparisons, Hill has the potential to be as dominating as Tennessee's Eric Berry at the free safety position. A game-changing free safety was vital to the Gators' 2006 national championship (Reggie Nelson) and Florida's coaching staff is hoping Hill turns into that type of player.