GAINESVILLE -- Incoming freshmen reported today but the No.3 newcomer on our list has been on campus since January. Unlike our previous newcomers to make the list -- Matt Patchan and Will Hill -- Moore is expected to make an immediate impact.

A 6-4, 225-pound receiver, Moore will serve as the possession receiver the Gators lacked in 2007 and will likely replace Bubba Caldwell in the staring line-up. Receiver Percy Harvin recently told 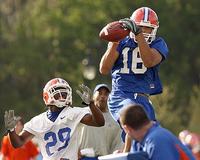 Gator Clause that Moore is a step slower than the Gators' returning receivers but makes up for it with size and sure hands. Harvin compares Moore to former Florida receiver Dallas Baker, who was a major contributor during the 2006 national championship season.

Moore's primary competition for playing time will be redshirt freshman receiver Deonte Thompson, one of the receiving corps hardest workers. Moore is currently quarterback Tim Tebow's third option but if Moore proves he can hold onto the ball over the middle he will challenge Harvin as the team's leading receiver.