GAINESVILLE -- He's quick, he's strong, he's 6-foot-1, he weighs about 300 pounds ... and he can freaking dunk! No.2 on our list of "Top Five Newcomers" is none other than incoming freshman defensive tackle Omar Hunter. 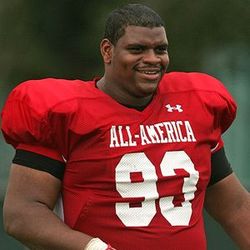 Florida fans have heard a lot about Omar Hunter [pictured]. He's a coach's dream, Meyer says. He's going to be an instant leader, Meyer says. If I had a nickel for every time I have heard Urban Meyer tell reporters or fans how good of a football player Omar Hunter is and will be, well, I'd have a lot of nickels. At least enough for a can of Jolt Cola.

Remember old Jolt Cola. Such a wonderfully evil marketing slogan. Remember? "Twice the caffeine. Three times the sugar Well, I like to call Meyer's incessant mentioning of Omar Hunter's prowess and potential as the Jolt Football marketing ploy. It's no coincidence that Meyer's favorite son is from Georgia. It's also no coincedence that Florida beat out Georgia for Omar's services. Why has Meyer been beating Omar Hunter into the psyche of every Florida fan. Twice the hype. Three times the bragging. Take that Georgia, Meyer is saying. Meyer's chest pounding was so loud that The Gainesville Sun actually sent a columnist to Georgia this offseason to do a profile on Hunter shortly after he signed. (What really happened: Hunter originally committed to Notre Dame before snubbing the Irish for the Gators. Hunter always wanted to be a Georgia Bulldog but UGA coach Mark Richt got involved in the recruiting process a little too late. Meyer swayed Hunter's mom, which helped sway the player.)

But Hunter isn't No.2 on Gator Clause's list solely because Meyer likes sticking it to Georgia. Hunter is No.2 because Florida is weakest along the defensive line and Hunter can make an immediate impact if he's half as good as Meyer is hoping. And if he's not, then his struggles could have an equally negative impact. After all, Florida struggled along the defensive line last season and the situation might be a little bleaker this time around. That's bad news. (Someone ANYONE! has got to stop Knowshon, right?)

One of the main reasons Knowshon carved through Florida's defensive line in the second half of last season's rivalry was the ACL injury suffered by defensive tackle Javier Estopinan. Javy tore his ACL in the first half and UF couldn't contain Moreno in the second half.

The injury was Javy's third ACL tear in five years. Javy, a Miami native, says he'll be ready for two-a-days this fall but that's no guarantee. That means Florida might need a pair of new starters at the beginning of the season. 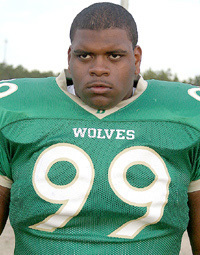 There are plenty of names on the roster to play defensive tackle but will any of them stand out in two-a-days? Let's look at the list candidates: Torrey Davis (Constantly in the doghouse.), Terron Sanders (Can he stay healthy?), Brandon Antwine (Will he ever play football again?), John Brown (Can he really cut it academically?), Justin Trattou (Is he really big enough to line up on the inside on rushing downs?), Lawrence Marsh (Needs to be a contributor in his sophomore season.) and Troy Epps (Coaches dogged this JUCO transfer more than anyone during the spring. Is that kind of attention good or bad?).

Is Hunter [Check out this picture. Hulk Smash!] a sure thing? Is he the Tebow of the defensive line or the Major Wright of the secondary? No, he's not a sure thing. Hunter apparently had problems with his back while in high school. An oft-injured Omar Hunter in 2008 would be a major blow for the Gators' chances of winning the SEC East. At least, that's how Meyer makes it seem. Me, personally, I've got to question whether or not a true freshman can be productive at defensive tackle in the SEC.