« Demps vs. Capel today in the 100-meter semis and more UF connections at the U.S. Track and Field Olympic Trials... | Main | Welcome to Gator Clause, Florida fans; Join in the conversations »

If you're reading this blog for the first time today, then you've already missed our five-part blog series on the football team's top five newcomers. Don't worry. You can catch up. Just click on the names of the previous "Top Five Newcomers" right here:

GAINESVILLE -- No.1 on our list of top newcomers is USC transfer running back Emmanuel Moody. We here at Gator Clause don't necessarily think Moody is the best addition to the Gators' roster, but we do believe that Moody's potential impact is greater than any newcomer. 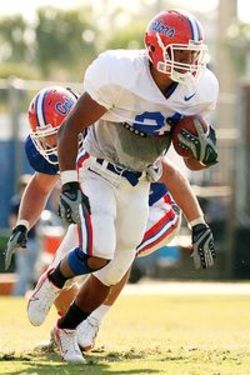 Why, exactly? Well, the Gators start and stop with the success and health of Tim Tebow and Moody, if he's productive, might be the guy that keeps Tebow out of the trainer's room this season and on the field. That's right. The more Moody carries the ball the less likely the Gators' superstar quarterback gets injured.

Tebow didn't miss a game last season but that doesn't mean he didn't sustain injury. Tim received shots of a painkiller in his right (none throwing) shoulder for much of the season. He then broke his non-throwing hand against Florida State.

Even more than a better defense, a healthy Tebow is what the Gators need to win a national championship. Moody, the USC transfer who redshirted last season, might be the key. Moody showed glimpses of his potential his freshman season at USC. He had several solid games before being limited by injuries.

A digression here: I'm still scratching my head as to why, exactly, Moody transferred to Florida. He says he left USC to become a featured running back but a featured back is one thing Urban Meyer's and Dan Mullen's offense does not produce. Moody might be the first, who knows? But I doubt it.

Moody probably should have gone to North Carolina if he wanted 20+ carries a game. Why do we mention all of this? We're wondering if Moody will become a distraction if he doesn't get the amount of carries he needs to feel like a major contributor. Moody could have stayed at USC if he wanted a chance to win a national title. He wants to run the ball and the guy isn't afraid to speak his mind, something most UF players do not do.

We'll keep an eye on Moody's morale during preseason practice and two-a-days. If you believe Urban Meyer (which I don't in this case), then the starting running back position isn't even Moody's right now. According to Meyer, Kestahn Moore is still the starter. Meyer swears by Moore. This is strange because if Meyer went back and watched at few game films from last season, then he would be swearing at the fumbles Moore coughed up in close games. Our guess: Meyer is just playing head games with Moody. Meyer got on Moody's case after he fumbled in the end zone during the spring game. It seems like flawed logic that Meyer would berate Moody publicly 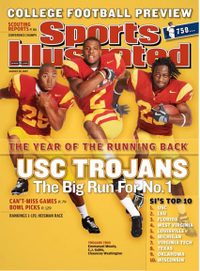 for one fumble in a spring game but still allow Moore to be on the team after the costly fumbles last season. (A side note to this Moody-Moore situation. The two Texans played against each other in little league football.)

OK, digression over. Back on topic...Moody, more than any newcomer, is the key to the Gators' success in 2008. When Moody first showed up last season, all Meyer would say to him when they ran into each other in the football facility was, "I sure hope you're good." There was a reason for that.

[Check out this SI cover from 2007. That's Moody on the left. Instead of splitting time at USC last year, he decided to transfer to UF and sit out a season. Wonder if Moody will make the 2008 SI college football preview cover as a Gator this time around?]