For the next week or so Gator Clause will focus on five newcomers expected to make an immediate impact this fall...or, put another way, five newcomers who need to help out immediately.

GAINESVILLE -- Matt Patchan has made more news than any other UF newcomer. He first received headlines when he criticized the University of Miami football team's effort in the 'Canes embarrassing loss to Virginia. 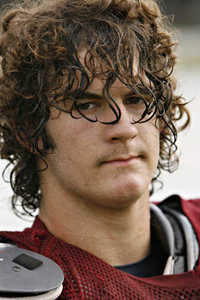 Patchan then chose the Gators over Miami even though his father and uncle played for the 'Canes. Patchan graduated from Seffner Armwood in December and enrolled at UF for the spring semester. Despite arriving at Florida underweight for an offensive lineman, Patchan thrived during spring practice and impressed UF coaches enough to get a serious look along the defensive line.

Patchan played offensive and defensive line during the Gators' Orange & Blue Game and was singled out by UF coach Urban Meyer as being one of the Gators' top newcomers of spring practice.

It didn't take long before Patchan was in the news again. This time, it was for all the wrong reasons. Patchan was shot in the arm this summer while he was visiting friends in Tampa. Patchan was apparently caught in the crossfire of a random shooting at a Tampa-area park.

Florida doctors believe Patchan will be back to full health in time for fall practice. Coaches expect Patchan to add immediate depth along the defensive line, freeing Mike Pouncey to move back to offense. Coaches love Patchan's intensity and work ethic on the practice field and he is quickly building a reputation as one of the Gators' hardest workers.

Expect Patchan to receive playing time next fall as a back-up defensive lineman. He is also expected to contribute on special teams.