The kids go to summer camp in one week. There will be plenty of time during preseason practice and two-a-days to write about the unknown. For one week, let's break down the Gators' perceived strengths...

GAINESVILLE -- Special teams might not be the most exciting thing to read about on the eve of preseason practice, but it will likely be the difference this season in making a BCS bowl or a return trip to the Capitol One Bowl. Everyone remembers 2006, right? Florida had a school record eight blocks, including three against South Carolina. 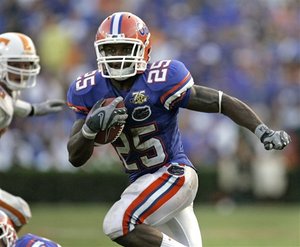 The pieces are in place this preseason for the Gators' best collection of special teams units since Florida coach Urban Meyer arrived in Gainesville. Without questions, special teams will be one of the Gators' seven greatest strengths.

PUNT RETURNS: Junior Brandon James [PICTURED] has been a special teams dynamo for two seasons. The Gators led the SEC in punt-return average last season (15.1 yards) and should rank among the nation's best this season. James is a preseason all-SEC first-team special teams selection.

KICKOFF RETURNS: This will be the second season for the new kickoff length. Kickoffs from the 35-yard line instead of the 40-yard line have added extra importance to return specialist around the country. In 2007, the Gators ranked ninth in the Southeastern Conference in kickoff returns (20.7 yards per return). With the additions of Chris Rainey and Jeffrey Demps, two of the fastest players in college football, Florida should improve dramatically in this category. (Assuming they can hold onto the ball during preseason practice.)

PUNT DEFENSE: This is the Gators' most efficient unit. In 2007, Florida led the SEC in punt return defense, allowing an average of 0.6 yards per return. Sophomore punter Chas Henry led the SEC in net punting average (38.7 yards) and opposing teams only gained 22 yards ALL SEASON. Gator Clause has one request to the Gators' coaching staff regarding Mr. Henry. Could we please get at least one fake punt this season? Henry was a quarterback in high school and has an excellent arm. And believe it or not, he's also one of the most confident athletes on the team. (Can a punter even be considered an athlete?) There's got to be one or two special teams fakes in Meyer's playbook designed for Henry. Make the call!

FIELD GOALS: Field-goal kicking was not a strength for the Gators in 2007 but it was still an improvement from 2006. Last season, Florida made 67 percent of its field goals (10 of 15), which ranked ninth in the SEC. In 2006, Florida made only 6-of-15 field goals. Florida returns a kicker from last season, but Jonathan Phillips (Wellington) isn't a guaranteed starter. He will have to battle highly touted freshman Caleb Sturgis for the position. Most expect Sturgis to be the starter. We'll see how he can handle the pressure. Meyer, who coaches special teams, will certainly test the freshman.