There will be plenty of time during preseason practice and two-a-days to write about the unknowns. For one week, let's break down the Gators' perceived strengths...

GAINESVILLE -- Consider this when you're in the local sporting goods store, trying to figure out which UF jersey to rock on Sept 6: The success of the 2008 Gators might have more to do with No. 51 than No.15. (Interesting how those numbers mirror each other, isn't it.) 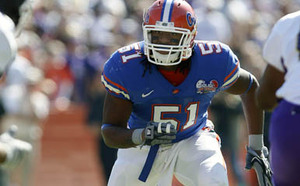 Gator Clause posed this question to Florida coach Urban Meyer during SEC Media Days: All things considered, is the leadership of Brandon Spikes more important to the team's success this year than Tebow's?

I got some weird looks (well, that's nothing new) from some of the 56,003 reporters in the press conference who wanted nothing more than to talk about Tim Tebow for 30 minutes. But Meyer's answer confirmed my suspicion: Brandon Spikes' responsibilities this season are just as demanding as Tebow's. 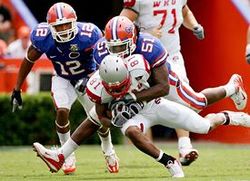 Brandon Spikes didn't begin to fully develop into a good football player until the second half of the season last year. That was the case for three reasons: 1. He was a first-year starter; 2. He was a sophomore; 3. He had a poor offseason.

According to Meyer and UF strength coach Mickey Marotti, Spikes didn't improve himself physically or mentally during the summer before his sophomore season. In short, he didn't feel like he needed to earn his starting position. Spikes' lack of preparation left a major hole in the defense when Brandon Siler left for the NFL.

Marotti tells a different story about Spikes one year later. According to Marotti, Spikes was one of the Gators' hardest workers this summer. Marotti now says that Spikes has the work ethic of a captain and will be the fulcrum of the Gators' defense.

Spikes led the Gators with 131 tackles (81 solo) in 2007. He begins fall camp on the Ronnie Lott Trophy and Bronko Nagurski Trophy watch lists.