There will be plenty of time during preseason practice and two-a-days to write about the unknowns. For one week, let's break down the Gators' perceived strengths...

GAINESVILLE -- Excitement grows as Aug. 4 approaches. Just a friendly reminder before we analyze the Gators' offensive line: Free doughnuts for anybody who joins me at 6 a.m. on Monday for the Gators' first practice!

OK, offensive line. Florida coach Urban Meyer has twice [FSWA Media Days and SEC Media Days] called his offensive line the strength of the entire football team. Gator Clause doesn't agree (last time we checked, Tim Tebow was still on this team) but the fact remains, the O-line has the potential to be pretty good this season. 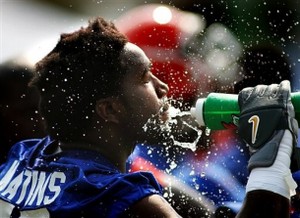 Four starters return and Meyer said recently that he's "ready to go to war" (or something like that) with more than enough depth at the position. Meyer probably found it slightly insulting that reporters who cover the SEC didn't agree. Only one returning offensive lineman, guard Jim Tartt, was voted to the preseason all-SEC team. (And it was third-team offense, at that.)

Individually, Florida might not have a superstar offensive lineman but as a whole the group appears solid. When it comes to offensive line, it's all about the group and not the individual. Barring injury this preseason, the starting offensive line seems to be set in stone. Tackles: Phil Trautwein and Jason Watkins [PICTURED]. Interior guards: Mike Pouncey and Jim Tartt. Center: Maurkice Pouncey.

Trautwein was the starting right tackle last season before he was sidelined with micro-fractures in his foot. Will Trautwein move back to his old position -- protecting Tim's blindside -- or will Jason Watkins slide over from the left side? Just a guess, but I expect Watkins to emerge from two-a- 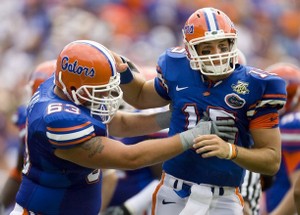 Jim Tartt [PICTURED WITH TEBOW] started every game last season at left guard and we expect him to stay put. Tartt might be the toughest dude on the ranch, if you know what I mean. Maurkice Pouncey played right guard in 2007 but will now replace Drew Miller at center. Mike Pouncey is the lone newcomer to the starting offensive line. He'll take over his twin brother's old digs. How proud are the Pouncey parents right about now? What a dream, right? Both your twin sons starting alongside each other on the Florida Gators' offensive line...AS SOPHOMORES.

With the Gators experimenting with the no-huddle offense this season, Maurkice's job becomes that much more important. Last season, Drew Miller had a little trouble during fall camp adjusting to the shotgun offense. Watch for Maurkice to go through the same early struggles. 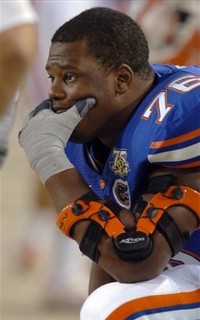 For those die-hard fans out there, Gator Clause is now about to project the second-string offensive line. We realize most of you could care less, but some of us are just football junkies that way.

Marcus Gilbert [PICTURED], a redshirt sophomore from Fort Lauderdale St. Thomas Aquinas, had a tremendous offseason and should emerge from fall camp as a second-string tackle. He'll be in the rotation and if Trautwein or Watkins goes down, then Gilbert will be the first guy off the bench.

THE RONNIE WILSON SITUATION
And what about Ronnie Wilson? Everyone remembers Ronnie's meltdown last year, right? He shot an AK-47 into the air because some idiot kept following him in his car after a dispute at a nightclub. Turns out the guy tailing Wilson was on the phone with 911 the whole time. Everyone remebers that, right? Well, Ronnie was banished from campus for a while but he's back and is enrolled in school. If he gets a second chance with the Gators, look for Wilson to add depth at offensive line. Last offseason he was a projected starter at left guard before his arrest.

SHOULD RONNIE WILSON BE ALLOWED BACK ON THE TEAM? And if so, should he have to sit out this season and participate solely on the scout team?