The kids go to summer camp in one week. There will be plenty of time during preseason practice and two-a-days to write about the unknown. For one week, let's break down the Gators' perceived strengths...

GAINESVILLE -- At the beginning of the 2006 season, the tight end position was a weakness for the Gators. Cornelius Ingram, Florida's only reliable option, was still learning the position. One year later, tight end is one of the Gators' top seven strengths. 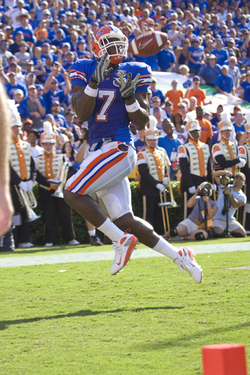 Ingram wisely passed on the NFL Draft and returned for his senior season and sophomore tight end Aaron Hernandez is an emerging star. Florida's coaching staff is so excited about the possibility of using a two-tight end power set that Meyer told reporters about the plan during SEC Media Days.

"We have a luxury this year," Meyer said. "We have two very good tight ends, two guys that are going to be playing football for a living if they stay healthy. So, you'll see two tight ends in the game at the same time quite often because they're both dynamic receivers. That's probably an element we have not done a lot of just because of personnel.

"Two years ago or three years ago we introduced a fullback. Everybody said, 'What a great addition to your offense.' Yeah, because we had a great fullback. Our fullback is gone. Now we have these two tight ends. We've been working quite diligently on putting together a little package with that."

Finally, a red zone option that doesn't involve Tebow scrambling or bulldozing his way across the goal line. Of course, I'm excited about this for selfish reasons. I'll have something different to write about on Saturdays. It's not like passing to Ingram in the red zone will be anything new. He had 34 receptions for 508 yards in 2007. And while her anked fourth in team receptions, Ingram led Florida in receiving touchdowns. By the end of the season, Hernandez could be better than Ingram.

With TWO all-SEC caliber tight ends on the field in 2008, opposing defensive coordinators will be overmatched. Teams simply won't have the personnel to properly defend each of the Gators' options. At least, that's the plan.