A quick heads up before we continue our CAMP COUNTDOWN series. Check out the combined efforts of The Miami Herald's college football crew in today's paper. Excellent work focusing on key questions concerning UF, UM, FSU, FIU and FAU. No paper in the state covers more college football teams than The Herald. CLICK ME! for the online version.

There will be plenty of time during preseason practice and two-a-days to write about the unknowns. For one week, let's break down the Gators' perceived strengths...Friendly reminder: Free doughnuts at 6 a.m. on Monday morning!!

GAINESVILLE -- Life is so much easier for a reporter when there's no quarterback controversy to worry about. The only thing remotely controversial about the Gators' signal caller, Heisman winner Tim Tebow, is whether or not this is his final season with the Gators. Well, is it? That is the topic 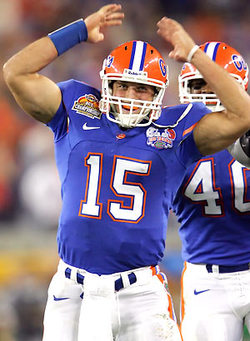 of today's Gator Clause Podcast. For now, let's focus on what we know for sure.

THIS IS WHAT WE KNOW FOR SURE: Tim Tebow [PICTURED] will run the football. (And he has no earlobes.) Last season Tebow was the Gators' best running back in addition to being a pretty good passer. He was Larry Csonka with an arm. (I wrote that a bunch last season.) Now, will Tebow once again lead the Gators in rushing this season? Probably. In words of Florida coach Urban Meyer, UF is going to "ride that horse." Meyer says he's going to limit Tebow's carries, but does anyone believe that's really going to happen? Not me.

There are drawbacks to Tebow the horse, of course, of course: 1. The running backs don't get any better. 2. Tebow gets hurt.

Tebow is not Superman. He's more like Captain America. (Or maybe Batman on account of the earlobes thing.) Tebow broke his leg in high school and last season he injured his right shoulder and later broke his right hand against FSU. Chances are Tebow will get hurt at least once this season. That's bring us to today's Camp Countdown topic: Quarterbacks and not just Tebow. Florida has some pretty good back-ups waiting for some playing time. 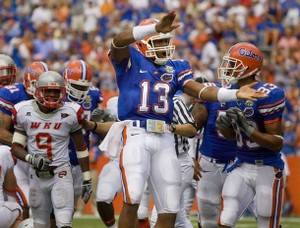 Cam Newton [PICTURED, NO.13] will begin camp as the second-string quarterback. Newton's personality has blossomed this offseason. He is now one of the team's vocal leaders and plays with more confidence, according to one member of the football team. The players respect him. Newton, a sophomore, played sparingly last season but will likely be given more game-time opportunities in 2008 to improve his poise.

Behind Newton on the depth chart is Brantley. Brantley, a redshirt freshman, is the team's best pure passer. He's more accurate than both Tebow and Newton and has the potential to one day be UF's starter. His development last season was limited by injuries (shoulder and hand). If Brantley stays healthy throughout fall camp, he could quickly turn into a realistic option.

QUARTERBACKS PRE-CAMP PODCAST
(Run time is four minutes and 50 seconds.) Outline:
1. Greetings
2. Five things Tebow will work to improve during fall camp.
3. 15 Tebow predictions, including a prediction on whether or not Tebow will turn pro after this season.