« Emails I get: Why he gotta be poor and stupid? | Main | Coaches' poll released: Gators to start season at No.5; Rival Dawgs are No.1 »

There will be plenty of time during preseason practice and two-a-days to write about the unknowns. For one week, let's break down the Gators' perceived strengths...Friendly reminder: Free doughnuts at 6 a.m. on Monday morning!!

GAINESVILLE -- Here's all you need to know about how deep the Gators are at wide receiver. Even if Percy Harvin isn't healthy by the beginning of the season, and Florida is forced to play Hawaii Percy-less, UF will still have one of the best receiving corps in the Southeastern Conference. 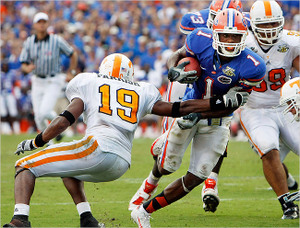 Florida coach Urban Meyer says that Harvin will be "ready to go" by Aug. 30. That remains to be seen. What we know as of right now is that Harvin [PICTURED] is not completely healthy as of Aug. 1 and will be limited on Monday when fall camp begins (at 6 a.m. Join me and get free doughnuts!!!). Harvin, of course, had offseason heel surgery to correct a bone-on-bone problem that was causing him a considerable amount of pain.

Despite the offseason setback, Harvin is considered a preseason Heisman Trophy candidate because, well, he's probably the best college football player in the country. He's so talented Florida's coaches don't even know where to play him. Is he a wide receiver? Is he a running back? He's both, according to the Gators' online roster. In 2007, Harvin led the Gators' in receiving Replacing Andre Caldwell will be a major topic once fall camp begins (at 6 a.m. on Monday. Get your free doughnuts!!!). There are plenty of receivers ready to fill that spot. Louis Murphy (6-3, 205-pound senior [PICTURED]) is the heir apparent to replace Caldwell and ready to fill Murphy's role are Riley Cooper (6-3, 215-pound junior), Deonte Thompson (6-0, 195-pound redshirt freshman) and Justin Williams (6-1, 205-pound redshirt sophomore).

Cooper, who spent his offseaon playing baseball, started the 2007 season with three touchdown catches but then suffered through several injuries. He's one of the best athletes on the team but Thompson [PICTURED] is one of the most focused and determined football players I've ever been around. (Just my opinion after several interviews.) Don't be surprised for Thompson to make a push during two-a-days for a starting spot.

Williams is the darkhorse to replace Murphy as the Gators' third option. Williams has excellent hands and, like Thompson, is a dedicated worker. Williams, redshirt freshman receiver Paul Wilson and the three pure freshmen receivers (T.J. Lawrence, Frankie Hammond Jr. and Omarius Hines) will more than likely be competing for starting spots on the Gators' special teams units this fall.

Carl Moore (6-3, 220-pound junior) and David Nelson (6-5, 215-pound redshirt junior) are the frontrunners for playing time as the Gators' first-option possession receiver. Moore, a JUCO transfer from northern California, is an exciting addition to the Gators' receiving corps. He was one of the nation's top recruits in 2007 and caused a little problem for the Gators when he told reporters in Sacramento that he spoke with Urban Meyer and Tim Tebow the night Tebow won the Heisman. It had the smell of a recruiting violation -- coaches aren't supposed to tell current players to speak with recruits over the phone -- but UF was later exonerated. Moore has been enrolled at Florida since January. He participated in spring practice and, according to Harvin, will be the Gators' 2008 version of Dallas Baker (big target, sure hands).

And don't forget, when the coaches need a burst of speed from the slot receiver position, redshirt freshman Chris Rainey could be a lethal option. The same goes for Jeffrey Demps.

The question is simple:
With all that talent, who gets the ball on the deep fly route with the game on the line?