« Harvin, Spikes, Hurt are out; Ronnie Wilson moves back to O-line; Patchan wowing coaches | Main | UF season preview; Plus 5 goals for a trip to Atlanta for the SEC championship game »

DE William Green is 'lightning' fast; Learn why he snubbed the Crimson Tide to play for UF

GAINESVILLE -- One defender will most certainly appear out of place on Saturday along the University of Florida's defensive line. True freshman William Green, all 215 pounds of him, will look like a stick figure when he lines up against Hawaii.

That revelation might come as a surprise to some, considering Green's slight physique, but McCarney says that he knew Green would be a significant contributor this season almost immediately during training camp.

"We're going to turn him lose and he's going to play," McCarney said. "It took about three days in camp to say that this kid is going to play this year. He'll help our team somewhere.

"He's not going to go in there and bull rush 310-pounders but he practices smart and he's got quickness and speed. I nicknamed him "Lightning" because he is really going to be something but you've got to be smart because he is 220 pounds ringing wet."

Gator Clause caught up with Green during the preseason and found out the reason why Green, who grew up in Hoover, Ala., snubbed the Alabama Crimson Tide in favor of the Gators. According to Green, it was a foregone conclusion for many in Hoover and Alabama that Green was heading to Tuscaloosa. 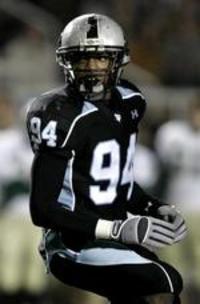 Green's coach at Hoover Spain Park even moved Green to linebacker during his senior season because, according to Green, Alabama's coaching staff wanted him to arrive on campus at Alabama with experience as a linebacker. There was only one problem with that plan. Green didn't want to play linebacker and Florida wanted Green to play defensive end. There you go.

A side note: Green is extremely smart and that likely helped his transition to college football. He picked up the Gators' defensive schemes quickly, allowing him to (as Florida's coaches like to say) play fast.

A second side note: Green's all-time favorite NFL player is former UF defensive end Javon Kearse. Kearse was nicknamed "The Freak." Green hasn't even played in one game at UF and already he has his nickname. This is a player to keep an eye on this Saturday.