The countdown is on at the University of Florida for the Gators' rivalry game against the Miami Hurricanes. Check out the exclusive story in The Miami Herald this morning about the football team's motivational bulletin boards. There are five separate boards for six teams: Hawaii, Miami, Tennessee, LSU, Georgia and Florida State...

GAINESVILLE -- You know how football players are always saying that the next game is the most important game. BORING, right? Well, Gator Clause offers visual proof that all that rhetoric is bologna. The Miami Herald snapped this photo on Friday during a tour of Florida's new weight room. (Holy Lou Ferrigno, the weight room is amazing! I felt my muscles getting bigger just walking through the joint.) By the looks of the countdown boards, the home opener against Hawaii feels a little less important than the game against the 'Canes, Vols, Bayou Tigers, 'Dawgs and 'Noles.

MORE NOTES FROM A TOUR OF THE NEW FACILITY
--If you're making a road trip to Gainesville this fall for a football game, then make sure you reserve some time for a tour of Ben Hill Griffin's latest addition. As UF coach Urban Meyer likes to call it, the "Front Door of Florida Football" is impressive and fan friendly, too. There are a few interactive video screens, a few shrines to Danny Wuerffel and Tim Tebow and some trophy cases.

--Reporters were given a behind-the-scenes tour of the coaches' offices, recruiting ammenities and weight room on Friday. A few thoughts:

--Dorian Munroe seems to be in great spirits. I ran into the Florida safety and Miami native while walking into the weight room. He said he's feeling great and ready to power through his rehab for the torn anterior-cruciate ligament his suffered during the offseason. Good luck, Dorian. We're rooting for your speedy recovery. --The coaches' offices are nice. Right when you walk in the front door, there's a poster board detailing Florida's dominance over Florida State the last few years. Recruiting is a dirty business. (Click on the photo and zoom into the graduation rates. And what you're seeing implies what, exactly? )

--Dan Mullen's office is HUGE! Plenty of breathing room to think about how to use all those offensive weapons. Tim Tebow and John Brantley were hanging out with Mullen. (Tebow had on his Crocs. Damn those Crocs!)

--The walls of each coach's offices were literally big dry-erase boards. So cool! The whole of all the walls was for doodling plays and formations and Tim Tebow quarterback-rocker plays and how Brandon Spikes is going to sack Georgia quarterback Matthew Stafford eight times in November. Raise your hand if you ever got pounded like Stallone in Rocky III for coloring on walls when you were a kid. 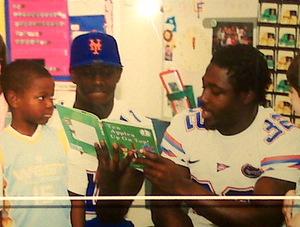 --The hall walls of the coach's offices are covered with screened photos of Florida football players and emblazoned with more literature for recruits. (In other words, walking into the coaches' offices feels like you're walking into one big media guide. In case you didn't know it, schools use media guides as recruiting tools.)

--Again, no sign of Steve Spurrier. (Well, not entirely true. Apparently, there's a team photo but you might have to squint.)

--But, we did see plenty of evidence of Ron Zook. Other than all the 2006 national championship memorabilia laying around, former and current "Zookerman," Jarred Fayson, is pictured on the walls of the coaches' offices reading a book to children. Giving back: What college football is all about! (That's linebacker Dustin Doe to the right of Fayson. Looks like Doe is doing all the reading.)