« Meyer: No timetable on Torrey Davis' return; Rainey says he's the king of the streets | Main | Emails I get: Goodman, you're a D'bag! »

Ronnie Wilson was at Ely all last season and Patrick Johnson still went to LSU?

GAINESVILLE -- As you know, The Miami Herald broke the news last night of Ronnie Wilson's marijuana arrest and the lucky break he got from the state attorney's office in Gainesville. (If you or I are on probation for a felony (reduced to misdemeanor), and we get pinched for marijuana, do you think the DA overlooks that? Uh, no.)

Here's a link to my story in The Herald. CLICK ME!

Here are some more interesting details from the case that I uncovered during the reporting phase of the story. You won't read this stuff anywhere this morning other than on Gator Clause. 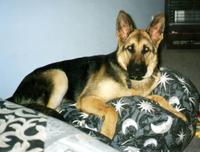 In case any of you canine lovers out there are wondering, Grady of the Alachua County Sheriff's Office is the drug dog that busted Wilson on Jan. 6 for possession of an illegal substance, according to the police report. The arresting officer [that would be Grady] also found drug paraphernalia, according to records. Grady is a German shepherd and a fine a police dog of impeccable record. (Good thing Grady wasn't an American bulldog; otherwise we might have to launch a formal investigation into the Alachua County Sheriff's Office for planting evidence. We kid because we can here on Gator Clause.) As we all know, German shepherd's are the undisputed king of all dogs. I know this as fact and it is not even open for discussion or argument. If you travel to Gainesville on game day this fall, rest assured that Grady will be working hard to keep you safe! [That's not Grady in the picture.]

--The terms of Wilson's plea bargain were spelled out in the official Judgment and Sentence. The court document reads: "Live and remain at liberty without violating any law. If you fail to complete the terms of your probation as required, you will be arrested ..." In the words of Napoleon Dynamite, "Lucky."

--According to the Judgment and Sentence, the court ordered a mental evaluation of Wilson.

--The court ordered Wilson to meet with the victim of the 2007 incident and apologize. Bet that was fun.

--The Alachua County judge who terminated Wilson's first probation (the one for the misdemeanor that ended on April 22, 2008) is no longer on the bench. Wilson is still on probation for the original felony charge until April 2009.

--This next bit might be even more interesting. According to official court documents, Wilson completed his 100 hours of community service as an assistant offensive line coach at his old high school, Pompano Beach Blanche Ely. Beats trash detail. A defensive backs coach, Anthony Wiggins, signed off on the student volunteer service program forms. Wiggins is a long time Ely assistant. He was on staff when Wilson played for the Tigers when Steve Davis (Now the head coach at Plantation.) was at Ely and Wiggins was on staff last year when James Jones was the head coach at Ely. According to the volunteer service forms signed by Wiggins -- forms that list every day that Wilson apparently was at Ely and span nearly two months but which have that unmistakable look of something that was filled out all at the same time -- Wilson was at Ely nearly every day from August 22 to October 10. I spoke with Jones to verify this. According to Jones, Ely's head coach, Wilson was only at the Tigers' practice "twice a week."

--I asked Wiggins about the discrepancy and he said that Jones didn't know that Wilson was at Ely nearly every day during the 2007 football season.

--Jones played football for the University of Florida.

--According to Wiggins, Wilson served as a role model to Ely's team and even spoke in front of the team several times.

--Wait, wait, wait. So, let me get this straight: Wilson was apparently at Ely's practice every day last season and coached in every game and cornerback Patrick Johnson still snubbed Florida for LSU? Wow!

--OK, OK. All jokes aside, here's my opinion on the matter: Should Ronnie Wilson be allowed back on the Gators' football team? Yes. Florida coach Urban Meyer is doing the right thing in giving Wilson another chance despite the drug arrest. Kids smoke pot. Kids make mistakes. I know my life needed a few breaks from some nice people. Meyer cares about winning football games but he also cares about the lives of young men. Football is an important thing in Wilson's life and it's important to Wilson's development as a young man. Just taking a guess, but I'm assuming this is Meyer's logic in keeping Wilson around. It probably doesn't matter to Meyer at all if Wilson ever plays a down of football for the Gators. If Wilson graduates, then it was all worth it.

--I'm happy to report that Wilson is taking EXTRA hours to get caught up in school! If Wilson makes it, then this could be one of the most important stories of the Meyer Era.

SOME MORE NOTES
--Percy Harvin didn't participate in 7-on-7 drills yesterday.
--Maurkice Pouncey is running extra for his traffic citation, open container in a motor vehicle.
--Only one practice today, this afternoon. Check back for live updates!