« Three days down; Three speedsters down | Main | It's so easy to make fun of the Georgia Bulldogs »

Is Aaron Hernandez ready to take over?

GAINESVILLE -- While Florida Nation awaits the status of Cornelius Ingram's knee, let's focus on the guy who will be starting at tight end if Ingram has a serious injury. 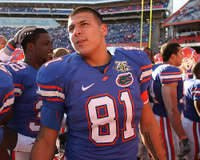 Hernandez played in 13 games as a true freshman but mostly on special teams. He began to show flashes of his ability late in the season and finished the year with nine catches and two touchdowns. Hernandez (Bristol, Conn.) was the No.2-rated prep tight end in the nation in 2007, according to Rivals.com.

Hernandez could play an important role for the Gators if Ingram's MRI revealed ligament damage. According to Florida coach Urban Meyer, Ingram injured his knee on Monday during 7-on-7 drills. Ingram had an MRI on Wednesday night.

Ingram returned to UF for his redshirt senior season despite an opportunity to be drafted professionally. If injured for the season, Ingram will only be eligible for a medical hardship (sixth year of eligibility) if Florida's staff can prove to the NCAA that Ingram was previously redshirted because of an injury. Ron Zook was the head coach at UF when Ingram was redshirted (2004).

So, is Hernandez ready to be a first-stringer?

IN THE NEWS: Former Gator safety Jerimy Finch might have transferred for family reasons. CLICK ME! for more news on Finch's transfer.