Live from practice...Ronnie Wilson looks good; So does Frankie Hammond Jr.; And guess who's a safety now...

Really upset with Krispy Kreme. The doughnuts are not fresh...Here's a link to my story in today's Miami Herald! Gators Hope To Blaze Trail to National Title. Here's a public-service link: Miami Heat dance team tryouts photo gallery! Sorry if the picture quality in this blog post isn't up to snuff. Deal, folks. I used my BlackBerry.

(If you noticed any typos earlier this morning it's because I wrote this blog on the BlackBerry as fast as possible...It has since been edited.)

GAINESVILLE -- The sun isn't up yet and already I've been at practice for 35 minutes. Freshmen and walk-ons are the only players practicing this fine morning. A few quick notes...

-T.J. Lawrence appears to be the Gators' latest safety convert. Lawrence, who was recruited as a receiver, is wearing a white practice jersey (meaning he's a defender; offense is in blue) and learning how to backpedal and defend. Safeties coach Chuck Heater is correcting his mistakes every five seconds. Yep, he's a safety now. Now Urban is actually working one-on-one with Lawrence. 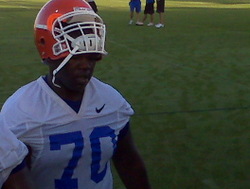 -Ronnie Wilson [PICTURED] of Pompano Beach Blanche Ely is practicing at defensive tackle. Wilson was kicked off the team last year for firing an assault rifle into the air near a downtown nightclub. Notice how there's no stripe on Ronnie's helmet. Guess that means he's already a part of the team. (For those who don't know what I'm talking about, incoming freshmen at UF have thin stripes on their helmets during preseason camp. When coaches take the stripe off, it signifies that you're officially a member of the team. Major Wright was the first player to be de-striped last season. Percy Harvin had the honor the year before that. I'm calling for Jeffrey Demps to lose his stripe first this season.)

-Texas cornerback Adrian Bushell [PICTURED] is in street clothes. Guess he hasn't made it through the NCAA Clearinghouse yet. Bushell didn't practice but he was still up early with the rest of the freshman. He was reading a sheet of paper throughout practice and following around cornerback's coach Vance Bedford. Assuming the paper was some kind of practice schedule or tip sheet.

-Jeffrey Demps is a strong freshman. He's bigger than Chris Rainey. (Well, that's not saying much.)

-Omar Hunter is a beast. He doesn't look out of shape to me. This guy is already bigger than John Brown.

-Matt Patchan is participating in drills but D-line coach Dan McCarney is telling him to take it easy. Patchan is looking good.

-John Brown and Brandon Hicks are practicing with the freshmen. Punishment? The probably have to take tests this afternoon, says UF's people. Summer B isn't over yet.

-Staying with the defensive line theme: Hoover, Ala., defensive end William Green is tall and lean. This guy is really fast. He could play linebacker. Speaking of speed, Matt Patchan is pretty fast. He looks to weigh about 250 pounds. Green appears to be about 225 at the most.

-Defensive backs coach Vance Bedford's metaphorical coaching technique: "You're a cat. You're hungry and you want to eat."

-Bedford is a crowd pleaser. He just called himself "gangsta.'" 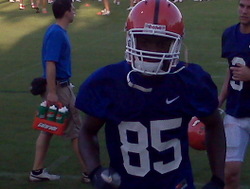 -Hallandale native Frankie Hammond Jr. [PICTURED] appears to have put on some muscle over the offseason. He looks good and just made an impressive diving catch near the sideline. Wow! Another great catch by Frankie Hammond Jr. He is definitely the highlight of the first practice. He caught a pass in traffic and then cut to the outside and blew past three defenders.

-More Bedford, as he walks off the field to fans: "Y'all got no life but you love football." I love this Bedford guy.

OK, that's it. Check back around 5 p.m. for a live blog from today's second practice. Will try to snap a picture or two of Tebow. 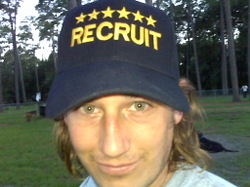 Oh, a final picture to share with y'all. A lot of people have been asking me to post a recent picture of myself up on the blog. I snapped this photo yesterday in the dog park. That's my new hat. (That's Guinness, my dog, behind my head.) I'm wearing the hat every day to practice (and maybe games) this season. (My offering of sarcasm to the ridiculousness of the recruiting craze.) I'm a six-star recruit. I write stories in 4.19 seconds.