« UF season preview; Plus 5 goals for a trip to Atlanta for the SEC championship game | Main | ONLINE PREVIEW: Gators ready to impress on Saturday in season opener with Hawaii »

Meyer: Patchan could get a starting nod 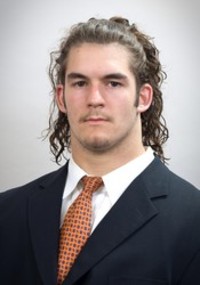 According to Meyer, Patchan [PICTURED, GREAT HAIR] is one of three players who could start at defensive tackle against Hawaii. The others are redshirt sophomores Lawrence Marsh and Terron Sanders.

Even if Patchan doesn't start, it's still quite a compliment for the kid to be considered worthy of a start in a season opener as a true freshman. And, considering Patchan's offseason, he must be one heck of a player. Defensive line coach Dan McCarney praised Patchan after Wednesday's practice. Gator Clause can't wait to watch this kid go. Sounds like he has the potential to be pretty special.

Patchan enrolled at UF for the spring semester and had a great spring practice despite some nagging injuries. Then, over the summer, Patchan was the victim of a seemingly random shooting near his hometown of Seffner. Patchan says he was lucky to walk away with his life. If that setback wasn't enough to discourage the freshman, he then strained his chest muscle while working out later in the summer.

The strained chest muscle limited Patchan's progression during the entire fall camp. He was only cleared for full contact drills on Monday. If you're counting, that means he has only practiced at full speed four times since the spring.

"We haven't settled on a back-up quarterback," Meyer said. "They're both fairly even and we hope to get them both in the game."

Get them BOTH in the game!?! This can only mean one thing: Florida must plan on beating Hawaii by at least 60 points.