ONLINE PREVIEW: Gators ready to impress on Saturday in season opener with Hawaii

PUBLIC SERVICE ANNOUNCEMENT: Check back on Saturday for pregame bloggery. Gator Clause will snap some tailgating pictures, report any recruit sightings and comment on any other observations that we find mildly interesting or smashingly brilliant. Then we'll blog live during the game. No. 5 Florida opens the season against unranked Hawaii and everyone is expecting a blowout. Dunlap [PICTURED, NO.8], who has the wingspan of a Cessna or perhaps a small bridge, is ready to oblige. He said on Wednesday that his new look defensive line "is going to show out."

"[The first game] is going to show everybody what we’ve got, so everybody knows what we have," Dunlap said. "We aren't going to hide anything. Right now we’re just hiding it. The first game, you’re going to see for yourself. Y'all can judge us.”

Carlos, we love your excitement but the official judging won't begin until next week, when the Gators host rival Miami. This Saturday is all about witnessing carnage the good ole fashioned way. And by old fashioned we mean Roman Coliseum style. Hawaii at Florida will be the north-central Florida version of Charleston Southern at Miami.

15 THINGS TO WATCH
So, as an informed Gators fan, what should you be looking for amid Hawaii's cries for help? Gator Clause is here to help you slosh through the bloodbath. Here are 15 things to look out for. (If you're keeping an eye on something we didn't mention, then leave a comment so everyone can appreciate your insight.)

1. Florida should score at least 45 points. Anything less will be for lack of trying.
2. If the Gators hold Hawaii to under 14 points, then that will be a clear sign that the defense has improved. Hawaii led the nation in scoring last year (43.4 ppg). Troy scored 31 points against the Gators last season in the unofficial season opener. (Western Kentucky doesn't count.) 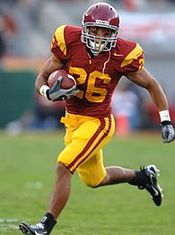 3. Pay special attention to how many carries redshirt sophomore RB Emmanuel Moody [PICTURED] accumulates. If Moody, the USC transfer, finishes the game with more carries than RB Kestahn Moore, that might be an indication for bigger things to come.
4. If RB Kestahn Moore fumbles, that's bad news for Kestahn Moore.
5. This might seem inconsequential to some, but it fascinates Gator Clause: Watch for RB Chris Rainey's shoe to fly off at any point during the game. Rainey didn't play much last season, but when he did it seemed like his shoes were always flying off.
6. Keep count of how many series Will Hill plays at safety.
7. Who's Meyer's designated kick blocker? This is an important job. My pregame guesses are William Green, Chris Rainey or Frankie Hammond Jr.
8. Does OG Jim Tartt play most of the game? His shoulders have been hurting, he didn't practice much during the preseason but he's apparently getting the start.
9. Redshirt freshman receiver Deonte Thompson (Belle Glade) is starting over junior Riley Cooper. Keep track of Thompson's receptions, drops and downfield blocking.

10. Watch for cornerback Joe Haden to move inside as the Gators' nickel cornerback. You might be surprised who takes Haden's place on the edge. My guess is true freshman Janoris Jenkins [PICTURED].
11. If Matt Patchan records two sacks against Hawaii, then I'm predicting a start against Miami, the team his father and uncle played for.
12. Keep an eye on No.1. It might just be me, but I wouldn't be surprised to see WR Percy Harvin run a few routes.
13. Middle linebacker Ryan Stamper is a redshirt junior but he's making just the second start of his career.
14. If CB Wondy Pierre-Louis gets an interception, look up to the press box. I'll be the guy screaming, "I told you so!"
15. If Tebow rushes more than 12 times against Hawaii, then he's going to win the Heisman this year. Just sayin', mmhmmm.

WEEK ONE SPOTLIGHT
In the course of three weeks, UF safety Justin Williams [PICTURED] has gone from fourth-string receiver to back-up free safety. Watch for Williams to get some reps against Hawaii. Remember, folks, UF's

secondary is one injury to Major Wright away from panic mode. (Wright broke his hand last season.) Williams needs some game-time experience before he gets tossed on the field as a starter.

"You're going to have to develop two deep, no question about this," Florida safeties coach Chuck Heater said. "The season is incredibly long."

Williams (6-1, 205 pounds) says he approached coaches about moving to safety. He had two interceptions in the Gators' first scrimmage of the spring and since that time Williams has proven to be a viable option. He played safety in high school and told Gator Clause earlier this week that he had 10 interceptions as a prep star in Georgia.

You're asking yourself, why is Florida such a heavy favorite against Hawaii if the Warriors played in the Sugar Bowl last year? Well, it's simple. Hawaii was overrated last year. No, just kidding. Hawaii has a new coach, (Greg McMackin) new quarterback (either Brent Rausch or Greg Alexander) and is playing at 12:30 ET, which is 6:30 a.m. Hawaii time. Of course, Hawaii did arrive on the east coast on Tuesday to get acclimated.

RANDOM ANNOYANCE
Why does ESPN and others insist on spelling Hawaii like this, Hawai'i? That accent mark between the 'ii' (or whatever it is) is silly and borderline self-righteous, if you ask me.

THE OTHER GUYS
Read how UF's future opponents faired on Thursday night, the opening night of the 2008 college football season:
LINK: Miami Hurricanes open new era with flair
LINK: Gamecocks shut out Wolfpack in opener
LINK: Nixon gets Vandy off to strong start

This will be the first game for UT and UCLA since 1997 when Payton Manning and the No.3 Vols defeated UCLA 30-24 at Pasadena...UT safety Eric Berry was the Sporting News' national defensive freshman of the year. Berry had five interceptions...UT's leading rusher (Arian Foster) and receiver (Lucas Taylor) return.

ESPN GameDay is in Atlanta for this season opener. Can Alabama coach Nick Saban get his first signature win with the Crimson Tide? Saban hasn't had a winning regular season as a coach in over three years. Clemson is stacked with offensive talent. Running backs James Davis and C.J. Spiller (who almost transferred to UF before 2007) return.

This is the upset everyone is waiting for. Appy State shocked Michigan last year in Ann Arbor. Can QB Armanti Edwards do the same in Death Valley. LSU defensive linemen Tyson Jackson and Ricky Jean-Francois will look to knockout Edwards early.