« Oddsmakers think Harvin is healthy; Set betting line at 1,500 yards; UF favored to win SEC over UGA; Plus a bookie's insight | Main | Florida is a 34-point favorite to beat Hawaii; Check out the official game notes »

Should Jamar Hornsby get a second chance?

GAINESVILLE -- Former Florida safety Jamar Hornsby was charged with four misdemeanor counts of unauthorized use of a credit card on Wednesday by the Alachua County State Attorney's Office. Hornsby was kicked off the team this summer for apparently using a gas card of a UF student who passed away earlier in the year. Hornsby was initially arrested for a felony. 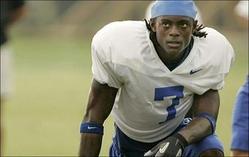 Should Hornsby receive a second chance with the Gators? UF lineman Ronnie Wilson was given a second chance at Florida football this year after initially being arrested for a felony. Wilson's felony charge was reduced to a misdemeanor and then dropped all together.

Hornsby has the same attorney, Huntley Johnson, as Wilson. Johnson has said that he is confident Hornsby's charges will also be dropped. Hornsby is currently at East Mississippi Community College, which means he will likely transfer to another FBS school (possibly in the Southeastern Conference) next season.

Should Hornsby be allowed back onto the UF team next season and given a similar chance at redemption a la Ronnie Wilson? If not, explain why because these cases seem similar in nature. Hornsby's alleged crimes, however, did not involve a rifle.