« Jeffrey Demps limping after last play of practice | Main | Is Aaron Hernandez ready to take over? »

Three days down; Three speedsters down

After three days of practice, the most memorable mental image of fall football camp at the University of Florida occured this afternoon when Percy Harvin (jersey No.1), Jeffrey Demps (No.2) and Chris Rainey (No.3) limped side-by-side-by-side to the back of Florida's practice field. (Otherwise known as "The Pit." It's where the injured players go and mill about during practice. 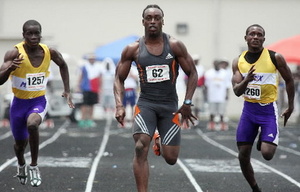 Harvin didn't practice for the second straight day (offseason heel surgery). Rainey pulled a groin muscle on Tuesday and didn't practice today. Jeffrey Demps [PICTURED IN BLACK] fell to the ground after the final play of practice with what appeared to be a left knee injury.

Florida coach Urban Meyer said he did not know the severity of the injury but Demps limped off the practice field with the help of an assistant trainer. At one point during Demps' walk back to the Gators' locker room inside Ben Hill Griffin Stadium (about 350 yards), a person stopped Demps, put his arms around the football player and appeared to whisper words of encouragement into his ear. (It looked like they were praying but I couldn't tell for sure.) I'm hoping since Demps was allowed to walk all the way back to the locker room under his own power then that means he's OK.

Demps' injury occured on the last play of practice. As the rest of the team huddled, Demps remained on the ground. Trianers immediately converged. Demps, the high school track phenom from Orlando, nearly qualified for the Olympics this summer in the 100 meters. He ran a 10.01 at the U.S. Olympic track and field trials and is considered to be the fastest teenager in the nation.

According to some, Demps could have pursued a career in professional track after his showing at the trials but instead chose to report to Florida for college football.

--Redshirt sophomore Marcus Gilbert (Fort Lauderdale St. Thomas Aquinas/PICTURED) told me after practice that he is playing first-string left guard as well as second-string tackle while senior Jim Tartt rests an ailing shoulder. Marcus' elbow is completely healthy after a long rehab. He played all last season with a brace. He is brace free right now and looking great physically. He told me about six times that he was excited about this season.

--Sophomore safety Major Wright (Fort Lauderdale St. Thomas Aquinas) told me after practice that the new safeties have "a long way to go" but that he sees potential. Major did say that freshman Will Hill has "the body and the skills" to contribute. Major Wright waited on Ahmad Black to finish interviews today. They walked back together and are apparently really close friends. Fans of high school mega programs Lakeland and Fort Lauderdale St. Thomas will get a kick out of that little nugget.