Will Hill: Savior or second-teamer?

GAINESVILLE -- Redshirt freshman Deonte Thompson (Belle Glade) made a great catch on Tuesday and that's when it dawned on me. There's no way Ahmad Black can play safety.

Thompson had no business catching the pass. Black was draped all over Thompson with excellent coverage. Major Wright was closing in, too. All three players went up for the ball and Thompson, somehow, made a remarkable catch. After replaying the sequence over in my brain (that's what sports writers do when they know they're going to write the details of an exciting play and there's no instant replay) I realized there was actually no "somehow" about it. Thompson shouldn't have caught the pass. 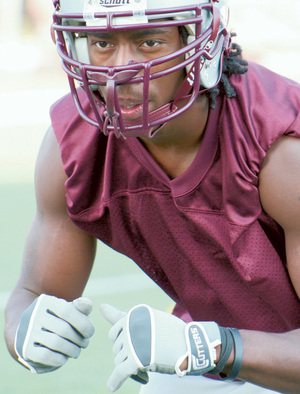 Black was right there and should have intercepted it or at least knocked it away. He could do neither. His physical limitations simply would not allow him to make the play. Bless his heart, he just wasn't tall enough. Ahmad Black is listed at 5-9 but he's not even that tall. I'm 5-7 1/2 and about eye level with Black.

UF's coaches only have one other option right now for the second safety spot, true freshman Will Hill [PICTURED]. Hill has to start. The way I see it, there's no other choice. (Other than moving Moses Jenkins to the position, which I think needs to happen. Jenkins (Lauderdale Lakes Boyd Anderson) looks great and will definitely be a reliable option in nickel and dime sets this season.)

Smartly, Hill is being low key about the battle at safety. He told reporters on Tuesday that Black was the starter.

"I'm still learning the position but I still have a guy in front of me who knows what he's doing," Black said. "I love the pressure, it's pushing me to be a better player."

Sophomore safety Major Wright is basically serving as Hill's own personal coach during practice. It's proof that Hill's development is Priority No.1 for the Gators during fall camp.

"As soon as I got here [Wright] got on me telling me everything, what to do, how to do it and about the temp mostly," Hill said. "It helps me a lot. He teaches me through his experiences." 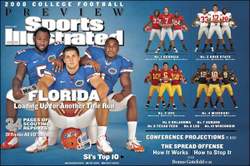 Tim Tebow is on another preseason cover, this time it's Sports Illustrated. Tebow shares the cover with Percy Harvin and Brandon Spikes. Oh, no! The SI curse. Me, I don't believe in curses. I do believe one thing, however, Georgia fans will feel slighted. They're the No.1 team in the country (at least in the coaches' poll).