« Percy breaks his silence...no kidding, we've posted the entire audio file just to prove it | Main | Keys to victory against the Canes; Plus a bold prediction »

GAINESVILLE -- UF safety Major Wright and his journey to the University of Florida is the cover story in today's sports section of The Miami Herald. Wright's decision to attend Florida was influenced by his mom, Andrea Eluett. Eluett didn't want her son going to Miami after the death of Hurricanes lineman Bryan Pata.

The article is pretty lengthy but there's some great stuff that didn't make the paper. Good thing I got this blog. (It gets me in trouble sometimes, but I love it!) 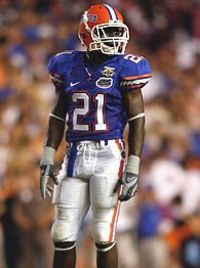 Wright [PICTURED] and Hankerson are great friends. They played high school together at Fort Lauderdale St. Thomas Aquinas, they hung out together on the weekends and after school and in the summer months crashed at each other's house from time to time. But of all the time Wright and Hankerson spent together, never once did Wright tackle Hankerson. That's the story, according to Hankerson and Wright. [UM beat writer Manny Navarro interviewed Hankerson this week about his friendship with Wright.]

"[Wright] has never hit me before, honest," Hankerson said. "There was one time in practice where he had a chance to, but he let up on me because we were friends."

That will change on Saturday when Wright, a safety, lines up against Hankerson, a receiver. For about three and hours on Saturday night, Wright and Hankerson will put their friendship on hold. And just to make sure Wright doesn't think about taking it easy on Hankerson when the possession receiver comes ventures across the middle of the field, Wright's mother made a point, recently, to address the topic.

"I told Major to have no mercy on Leonard," said Eluett, Wright's mother. "I know Leonard. Leonard has never gotten hit by Major, even in high school. "Well, see what happens. I told Major, 'I know you don't like to hit your friends, but you've got to hit your friends this time or you won't be playing.

"I guess they understand each other. We'll see."

That's a priceless quote, folks. Before we go any further, I've just got to say that Major's mom, Mrs. Eluett, is a great person. Like Major, his mom is funny and charismatic and witty. She doesn't won't Major to hurt Leonard. She just wants to make sure that Major plays to the best of his ability and doesn't get distracted. 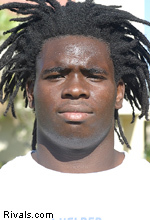 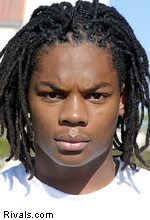 While Hankerson doesn't know personally what it feels like to get hit by Wright, the UM receiver has seen enough to know it probably hurts. [Check out these photos Rivals.com took of Wright and Hankerson when they were in high school. They even had similar hairstyles back then! Major is on the left.]

"When he goes at full speed, he's an amazing hitter," Hankerson said. "There are so many hits that stand out to me. I remember my senior year we were playing our spring game. Major was in Cover 2. [A receiver] came over the middle and Major just laid him out. It was the loudest bang I've ever heard on a football field. He did it again in a playoff game when they played Ely. He smacked this guy head on and just jarred the ball loose. He's a hitter."

Major forced three fumbles in 2007. He had an interception return for a touchdown in the No.5 Gators' season opener against Hawaii, a 56-10 win. [Now check out these photos of the two friends. The college boys clean up well, I'd say. Major, again, on the left.]

Hankerson isn't the only person to shutter when thinking about Wright slamming his body into an opponent. St. Thomas head coach George Smith once told me that Wright was one of the most vicious hitters he has ever coached.

On Tuesday, Florida redshirt freshman receiver Deonte Thompson put it best when he said that Wright "will kill himself trying to kill you."

Be afraid, Leonard. Be very afraid.