GAINESVILLE -- Florida coach Urban Meyer isn't wasting any time after the Gators' 31-30 loss to Ole Miss on Saturday. Gator Clause learned today that Florida has called an emergency practice for 8:30 tonight. Florida usually does not practice on Sunday during the regular season.

Is an emergency practice needed? It's a good idea. Meyer wants his team to shake the losing blues as soon as possible. Win out from here and Florida can play for a conference championship in December. The Gators play Arkansas next week and that helps. The Hogs are pretty bad. Florida has a good opportunity this week to focus on its own problems and make some corrections before LSU comes to town.

O-LINE ISSUES
Don't be surprised to see a new starter emerge at left guard this week if redshirt senior Jim Tartt's shoulders do not respond well to treatment on Sunday and Monday. Tartt left the Gators' game in the first quarter with an injured shoulder. He has had four shoulder surgeries in his career at UF.

Tartt's back-up at left guard, Marcus Gilbert, sprained his ankle during the fourth quarter on Saturday. Either Carl Johnson or James Wilson could start against Arkansas. Expect those players to battle Sunday, Monday and Tuesday for the promotion.

TEBOW'S SPEECH
Florida quarterback Tim Tebow apologized to Florida fans for the loss on Saturday and also made some promises. Here's the audio file of Tebow's passionate post-game speech.

SEC EAST STANDINGS
Five weeks into the 2008 college football season and Florida, Georgia, Tennessee and South Carolina are trailing Vanderbilt in the SEC East standings. Yeah, I'd say it's a pretty deep conference. Here's a link the complete SEC standings. CLICK ME!

FLORIDA STILL THE BEST?
Call me crazy, but I still think Florida might have the best football team in the country. The Gators made enough mistakes to lose 10 football games on Saturday and still had a chance to win the game at the end. The sky is not falling, Gators fans. Ole Miss was is a good team with legitimate NFL-caliber talent. Florida does not need to fire its offensive coordinator or bench Tebow. The Gators' coaching staff just needs to restore some confidence this week and maybe next time swallow its pride during a game and make better decisions.

AP TOP 25
The loss to Ole Miss dropped Florida eights spots in the AP poll to No.12.
Oklahoma, Alabama, LSU, Missouri, Texas -- there's your AP top 5. For the rest of the poll...CLICK ME! A few thoughts on the new rankings:
--No. 10 South Florida is ranked ahead of the Gators.
--USC, which lost to Oregon State on Thursday, is highest ranked one-loss team. Thoughts?
--Georgia is No.11, one spot ahead of Florida.
--In just five weeks, Nick Saban's Alabama Crimson Tide has gone from unranked to the No.2 team in the country.

BLOCKED EXTRA POINT ILLEGAL?
Florida coach Urban Meyer complained after the game on Saturday that an Ole Miss' defender hurdled a Florida offensive lineman illegally during the decisive extra-point attempt at the end of Saturday's game. Pushing off the backs of lineman to block kicks is apparently against the rules, but no flag was thrown on Saturday. Here's a picture of the blocked kick from an interesting camera angle. The Ole Miss defender who jumped over Florida offensive lineman Phil Trautwein might have been aided, but this picture doesn't show any proof. It does show, however, that Trautwein isn't blocking a single person. He's just crouched over in his stance. Does anyone find this odd? And what the heck is UF lineman John Fairbanks (No.59) doing? Ole Miss lineman Kentrell Lockett (far left) blocked the kick. 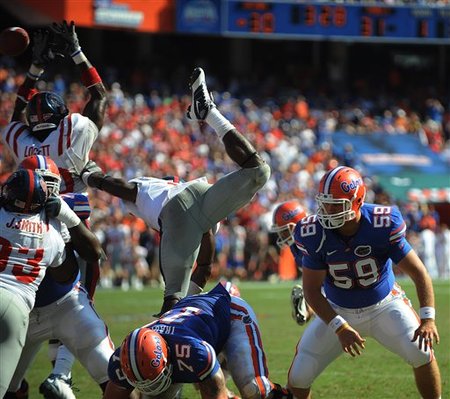