« SPIKES: Tennessee "not as tough" as Gators | Main | PREGAME PODCAST: Will Hill starting at strong safety? »

ULTIMATE PREVIEW: A healthy Harvin and Tartt should make all the difference

GAINESVILLE -- There is a dry-erase board outside the Tennessee locker room this week reminding the team that its next opponent thinks the Volunteers are a bunch of quitters. 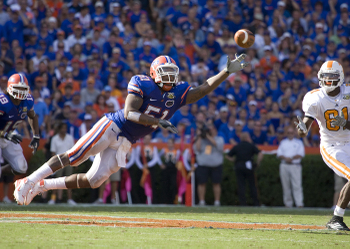 The Vols have latched onto Spikes' statements this week, drawing motivation from Spikes' claims -- one being that Tennessee players aren't as tough as Florida players. "It was probably (said) to provoke and get a rise out of us,” Tennessee running back Arian Foster told reporters earlier this week. "It's complete disrespect."

While Tennessee is using Spikes' statements to get fired up for Saturday's game, Florida is doing the same in Gainesville with its own motivational bulletin board [PICTURED, EXCLUSIVE PHOTO ONLY ON GATOR CLAUSE]. Tennessee is a permanent fixture of the Gators' bulletin board, located in the back of Florida's locker room. Florida's support staff has been adding articles and quotes from Tennessee players to the board since the preseason.

PERCY IS BACK
While bulletin boards and dry-erase boards are fun to write about, all that nonsense (false motivation) will only last about five minutes once the game begins. One of the most important storylines of this game is the full return of Florida receiver Percy Harvin, who had offseason surgery to his right heel.

Harvin [PICTURED] sat out the Gators' season opener against Hawaii and only touched the ball six times against Miami. The junior expects to be more involved this Saturday. In 2006, a freshman Harvin was only involved in a few plays before injuring his ankle against the Vols.

"All I can remember is the stadium shaking," Harvin said. "That was my first road game, my biggest game coming into that season. I can just remember the crowd and it shaking and not being able to hear Tebow call the plays in."

TEBOW LOVES NEYLAND STADIUM
Florida quarterback Tim Tebow told reporters earlier this week that Tennessee's Neyland Stadium is one of his favorite away venues in college football. (LSU's Tigers Stadium is the other.) 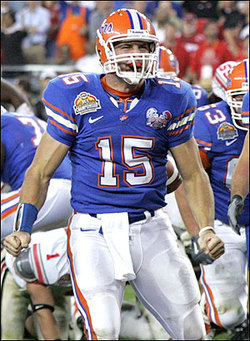 "I love playing at The Swamp but it is better playing on the road for me," Tebow said. "When you are playing at Neyland Stadium or at LSU or those stadiums that gets your blood going and that gets you excited and ready to play. For me, it is exciting and I enjoy it. The two probably loudest and most hostile are probably Tennessee and LSU."

Tebow [PICTURED] was a back-up quarterback to former Gator Chris Leak in 2006 but still had an impact in the Gators' win against Tennessee. It was the first road game of his career. Tebow, then a freshman, rushed for a two-yard gain on fourth down-and-one during the Gators' game-winning drive.

Harvin still remembers the look in Tebow eyes when UF coach Urban Meyer asked the freshman quarterback if he was ready to make the play.

"Coach came to Tebow on the sidelines," Harvin said. "Tebow kept telling [Meyer] to give him the ball and Coach said, 'If I put you in you better get this.' Tebow looked at him with this crazy look and he went in there and got it."

THE RUNNING GAME
Tebow will certainly get his carries on Saturday but Florida's offensive coaches will first try and involve the Gators' traditional running backs. That was a problem against Miami. Tebow led the Gators with 55 yards rushing. Harvin had five carries for 27 yards and three Florida running backs -- Chris Rainey, Jeffrey Demps and Kestahn Moore -- combined for seven yards on nine carries.

TRENDS IN THIS SERIES
The team with the most rushing yards has won 16 of the last 18 meetings between these two teams. Like Miami on Sept.6, Tennessee will focus on establishing the running game on Saturday and dominate time of possession. Tennessee senior Arian Foster is one of the best backs in the SEC and Tennessee's chances of winning the game will increase dramatically if Foster logs over 25 carries and grinds down the clock.

SPOTLIGHT ON SOPHOMORE STRONG SAFETIES
One key to Florida stopping Foster will be the play of Florida strong safety Ahmad Black, a sophomore. Florida has held Tennessee to 66, minus-11 and 37 yards rushing in each of the last

three contests. Florida coach Urban Meyer, who has never lost to Tennessee while at Florida (3-0), says there is no secret to stopping Tennessee's running game -- just overload the box. Black will be the extra man in the box when Tennessee runs the ball.

While Foster will help with run support, Tennessee's strong safety, sophomore Eric Berry, will help shut down Tebow and Florida's lethal passing attack. Berry [PICTURED] has two interceptions already this season and picked off Tebow last season and returned it for a long touchdown.

WILL STAN DRAYTON HAVE AN IMPACT?
To remind everyone, Stan Drayton is the running backs coach who left Florida for Tennessee during the offseason. This is a big week for Drayton, who expressed his displeasure with Florida's running game shortly after being hired by Tennessee. Drayton is familiar with Florida's personnel, something that worries Meyer.

WHAT'S AT STAKE?
This is the first conference game for both teams. While a loss won't kill either teams' hopes for an SEC East title, starting the SEC schedule with a win is very important.

Also at stake is Tennessee's all-time lead in this series. Tennessee leads the series 19-18. The rivalry started in 1916 and Florida has always trailed the Vols.

FIVE KEYS TO VICTORY FOR FLORIDA

5. Score first. Catching up will be a lot harder for Tennessee.
4. Limit Tennessee RB Arian Fosters' carries early. If Foster gets into a rhythm, keeping Tebow and Company off the field, the Gators could be in for a slugfest.
3. Tight end Aaron Hernandez will be open. Get him the ball.
2. Keep Tebow healthy. Tennessee will be looking to knock the Heisman Trophy winner out of the game.
1. Force Tennessee quarterback Jonathan Crompton to win the game. Crompton [PICTURED] is inexperienced. He couldn't beat UCLA and had trouble at times with UAB's secondary last week.

SERIES BREAKDOWN
Florida has won three in a row and five of its last seven games at Neyland Stadium.

RECRUITING
This game isn't nearly as important to recruiting as Florida's games against Miami or Florida State but Tennessee and Florida will still be battling for some of the same high school players. Tennessee has seven Floridians on its roster, including two starters, free safety Demetrice Morley (Miami) and kicker Daniel Lincoln (Ocala).

PREDICTION
Florida is a 7 1/2-point favorite, according to online sports betting websites. This seems like a pretty low number considering Tennessee lost to UCLA and struggling to put away UAB. With UF starters Percy Harvin and Jim Tartt back in the line-up, I expect Florida to cover the point spread and beat Tennessee 30-21.