Can UF beat LSU with limited Harvin? (with poll) 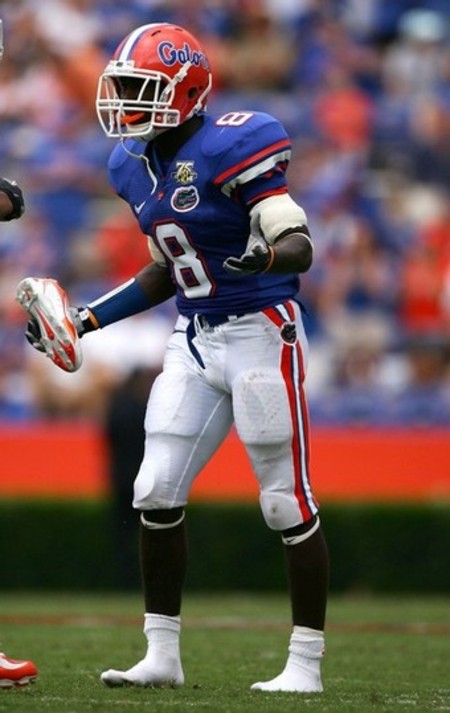 Little known fact: When UF running back Chris Rainey [PICTURED, NO.8] was a true freshman, he refused to play in shoes. (Much like a young Pele.) UF coach Urban Meyer is a big shoe guy (free trips from Nike), so the coach protested Rainey's no-shoe antics and redshirted the former Lakeland High running back. Now you know why Rainey wears shoes. Here's a picture from Rainey's rebellious days a true freshman, refusing to lace up his Nikes during a game.

With Moody, Moore and Harvin nursing ankle injuries, will RBs Demps and Rainey be enough to balance the Gators' offense

GAINESVILLE -- Percy Harvin didn't practice on Tuesday, Kestahn Moore is doubtful for Saturday's game against LSU and Emmanuel Moody is unable to play. All three players are suffering from ankle injuries.

If you're counting, that's three potential Florida running backs who are either questionable, doubtful or out for Saturday's game against No.4 LSU (4-0, 2-0). On Tuesday, Meyer said that he thinks Harvin's ankle should be healthy enough to play. Of course, if history is any kind of guide, when Meyer's players don't practice until Wednesday, that usual means they will play a limited role on game day. Assuming Harvin is an exception to the rule, expect the Gators to at least limit his backfield carries and focus Harvin's efforts at slot receiver. 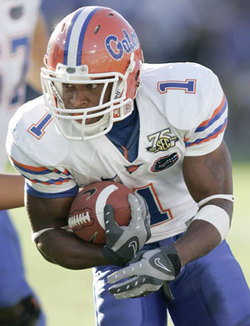 Can No.11 Florida (4-1, 2-1) upset LSU with a limited Percy Harvin? The gambling establishment certainly believes so. News of Harvin's practice status on Tuesday did nothing to the betting lines. According to one offshore betting service, Florida is favored by six points.

With Harvin [PICTURED, NO.1] limited, Moore either out or limited and Moody out, the bulk of the Gators carries will fall to quarterback Tim Tebow, junior return specialist Brandon James and underclassmen running backs Chris Rainey and Jeffrey Demps. (Where are Mon Williams, Bo Williams, Chevy Walker and Jarred Fayson when you need them?)

ANYWAY, Tebow's rushing yards are down this season while Rainey and Demps just turned in the best games of their young careers. Rainey is a redshirt freshman and Demps is a true frosh. They combined for 206 rushing yards and three touchdowns against Arkansas. James, the return man, has performed well in spots as a running back but hasn't had any significant success out of the backfield.

Rainey's and Demps' performances against Arkansas provided hope for this week, but is anyone out there really convinced Rainey and Demps can run the ball effectively against LSU based on the Arkansas game? Arkansas ranks last in the SEC in average rushing defense (208.4 yards per game). Meanwhile, LSU is ranked third and only allowing an average of 69.0 yards per game. The Tigers have allowed just three rushing touchdowns this season. 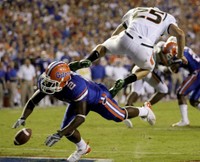 If the long run isn't there, Tebow says it's important that Rainey and Demps "get us two or three yards and keep us in a good down and distance."

More to the point, Tebow was asked directly if UF needed big games from Demps and Rainey to win.

"I think so," Tebow said. "Do they need to make 80-yard runs like they did last week? I don't know. That would be nice -- be extremely nice -- but just manage the ball; get us in good down and distances; if they're in pass protection, make sure they pick up their blocks: those types of things first to keep the offense going and then, when they get in the open field, if they make somebody miss, that's just a plus."