« Why Florida lost to Georgia and how to prevent it, according to Meyer | Main | NOTEBOOK: Gators split over Presidential candidates » 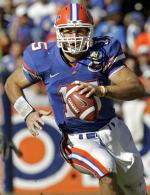 into the top spot among in-state quarterbacks. Tebow has been consistent over the past four weeks while Grothe played erratically in losses to Pittsburgh and Louisville. Grothe threw one interception against Pitt and two against Louisville on Saturday. Meanwhile, Tebow has tossed 12 touchdowns and only two interceptions in seven games. (OK, maybe that's not much of a difference.) Tebow has one loss and led the Gators to a win over LSU, a team ranked in the AP top 5 at the time.
QBs to consider: Matt Grothe, USF junior (14 touchdown passes and 1,896 yards passing, three rushing touchdowns). Curtis Pulley, Florida A&M junior (Exploded in last two games with 424 yards passing and six touchdowns and 219 yards rushing). Christian Ponder, FSU redshirt sophomore (Impressive rushing performance in win against Miami...Completed 11-of-19 attempts and a touchdown on Saturday in win against Va. Tech).

receivers for the most receptions (26). He is tied for the lead among all in-state receivers in touchdown catches (six). He has 429 receiving yards. Harvin's effort in the Gators running game puts him over the top, though. On the ground, Harvin is averaging 6.8 yards per carry (212 yards on 31 carries) and has three rushing touchdowns.
WR Kevin Elliott, Florida A&M freshman: We can't ignore Elliott anymore. He has been solid all season and now leads all in-state receivers with 40 receptions for 535 yards and six touchdowns.
Cortez Gent, FAU junior: 31 receptions for 474 yards and three touchdowns, including a game-winning score last week.

TE Jamari Grant, FAU junior: Grant (6-5, 210 pounds) leads all in-state tight ends with 26 receptions for 380 yards and a touchdown.
TEs to consider: Aaron Hernandez, Florida sophomore (Hernandez began the season as a catch-first tight end but has grown into a respected blocker over the last three games. He has 15 receptions for 145 yards and two touchdowns. Eric Kirchenberg, FIU senior (A dedicated team leader, Kirchenberg is an excellent blocker and has nine receptions for 94 yards and one touchdown.

OT Jason Fox, Miami junior: While the 'Canes offense struggled earlier this season, Fox was a mainstay and continues to be a player the team's players and coaches rely on for leadership.
OT Patrick Brown, UCF junior: Could be the Knights' most highly drafted player in school history in April.
OG Rodney Hudson, FSU sophomore: Continues to prove himself as the best lineman in the state. Had his way with the Miami defensive line.

ATH Jeff Demps, UF freshman: I really wanted to find a way to leave Demps off my ballot because he's a freshman. But, alas, he's just too stinking good. Demps only has 30 carries this season but he leads the Gators in rushing (357 yards). He's averaged 11.9 yards per carry and has scored four rushing touchdowns. Last Saturday he carried a screen pass for a 61-yard score. In addition to his offensive contributions, Demps has blocked two punts, which led to nine UF points.

DEFENSE
DL Everette Brown, FSU redshirt junior: Proving to be one of the best defenders in the state. 11 tackles behind the line, six sacks, forced fumble. 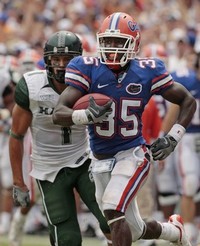 S Travis Roland, Bethune-Cookman senior: Roland is having an amazing season and it's not going overlooked. (At least not by Gator Clause.) Roland leads his team in tackles (56), tackles behind the line (10.5), sacks (6.5). He has one interception for a 47-yard return, two forced fumbles, two pass break-ups and he has also recovered two fumbles.
S Ahmad Black, UF sophomore, PICTURED: Once an emergency fill-in at strong safety, Black has risen to greatness quickly. He leads UF with three interceptions with 120 return yards to go along with 29 tackles. He has also forced a fumble and blocked a field goal.

ATH Scott Bryant, FIU junior: This Lakeland native leads FIU with 59 tackles, including 5.5 tackles for losses. He also has a sack, a pass break-up and two forced fumbles.

SPECIALISTS
ATH Brandon James, UF junior: James leads Florida with 860 all-purpose yards and most of those yards came by way of amazing returns. He has 374 return yards on kickoffs (28.8 yards per) and 363 return yards on punts (20.2 yards per). James has scored five touchdowns, including two on punt returns. James has also recovered a fumble on punt coverage and converted a fake punt for a first down against Arkansas.

ALL-FLORIDA POWER RANKINGS
1. Florida (6-1, 4-1 in the Southeastern Conference): The Gators are now playing like one of the best teams in college football. Georgia looms.
2. Florida State (6-1, 3-1 in the Atlantic Coast Conference): Don't look now but the 'Noles are sitting atop the ACC standings and their young quarterback is building confidence.
3. Miami (5-3, 2-2 in ACC): The Canes are surging behind their duo of underclassmen quarterbacks. A collection of talented freshmen have Miami on the fast track.
4. USF (6-2, 1-2 in the Big East Conference): The Bulls fall behind the 'Noles and 'Canes in the All-Florida power rankings after a loss to Louisville.
5. FIU (3-4, 2-1 in the Sun Belt Conference): The Golden Panthers travel to La.-Lafayette for a huge conference game this Saturday.
6. FAU (3-5, 1-2 in Sun Belt): Dramatic win for FAU on Saturday night against La.-Monroe.
7. UCF (2-4, 1-1 in Conference USA): Central Florida enjoyed a bye week. Hope the Knights are ready for undefeated Tulsa.
8. Florida A&M (6-2, 2-2 in Mid-Eastern Athletic Conference) Have the Rattlers found a star in freshman receiver Kevin Elliott? Yes.
9. Bethune-Cookman (5-2, 2-2 in MEAC)
10. Jacksonville (5-3, 3-1 in Pioneer Conference)

Discussion topics:
--You, the loyal reader, can lobby for one player that's not on my ballot. Let me read your take and I'll consider it.
--Are 12 Florida Gators too many for my ballot. I realize I cover the Gators and might be slightly swayed towards nominating players I see every day, but as of right now I think the state's balance of power is about this proportional.
--Is there another defensive lineman out there better than Lawrence Marsh? I didn't want to put him on the team but I analyzed each team's best defensive linemen but still kept coming back to Marsh. Did I overlook somebody or is Marsh the guy?
--Is Miami only worthy of one All-Florida spot? They've got some good young players but every time I stacked them against the competition the 'Canes fell short.
--FAU with three picks? It seems a little off but those three players are excellent and could star for any team in the state, in my opinion. Perhaps Miami tight end Dedrick Epps?
--Welcome to the conversation, FIU. Last season, I didn't nominate a single Golden Panther. Bryant (a close friend of Ahmad Black's, by the way) and Gaitor are serious playmakers on FIU's defense.
--Should I give Florida A&M and Bethune-Cookman this much love on my ballot?
--Should Ahmad Black be on my ballot? What about FSU's Myron Rolle or USF's Nate Allen or UF's Major Wright, for that matter? Wright has two interceptions this season and 35 tackles.
--Should Grothe be on my ballot instead of Tebow?