No.4 LSU is the Rodney Dangerfield of the SEC 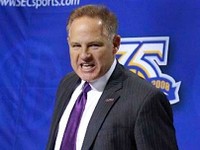 GAINESVILLE -- Those LSU Tigers must be feeling like the Rodney Dangerfields of college football this week. Like Dangerfield used to say, the Tigers "get no respect."

No.4 LSU (4-0, 2-0) has been dissed every way possible so far this season and now the Tigers are considered underdogs for Saturday's away game against Florida (4-1, 2-1), a team that lost to Ole Miss at home. No respect, I tell ya'.

Florida is a five-point favorite against the defending national champions, a team the Gators lost to 28-24 last season. Adding to the insults, LSU has been leapfrogged in the national AP Top 25 twice in the

last two weeks. None other than Alabama (coached by former LSU man Nick Saban) moved ahead of LSU last week and this week Missouri -- MISSOURI! -- jumped the Tigers.

"I really, honestly, don't know what that's all about," LSU sophomore linebacker Kelvin Sheppard told reporters on Monday. "I don't know what we have to do to prove ourselves.

"What do we have to do to get some attention? Well, I guess going down [to Gainesville] this weekend, I think me and my team, we've definitely got something to show everybody."