« Who would win in a fight, Tebow or Bama LB Rolando McClain? | Main | SEC championship game: 'This is basically Frazier vs. Ali' »

Meet Lane Kiffin, a man with a wife 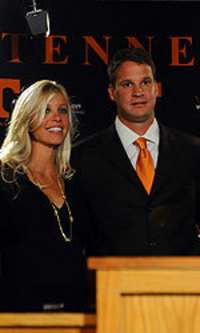 GAINESVILLE -- OK, I'll be the first wise guy to write what everyone is thinking. Lane Kiffin's wife is ... not going to fit in in Knoxville. [Insert stupid joke about Tennessee hiring Lane Kiffin to replace Phil Fulmer here.]

In case you haven't heard, Kiffin said something really stupid during his introductory press conference: "I'm really looking forward to embracing some of the great traditions at the University of Tennessee. For instance: running through the 'T,' singing "Rocky Top" all night long after we beat Florida next year. It will be a blast.

"That line was Mike's idea, by the way. All right, Urban?"

9) My name is Urban and his is Lane. That's a weird analogy, but it works. Urban:Florida as Lane:Tennessee.

8) Would I even hire Lane Kiffin to baby sit my kids?

5) Why did Lane Kiffin apologize to me during his first press conference?

4) Who is Lane Kiffin's agent?

2) Tell Foley to give Billy and Dan more money.