« Dainty Florida will roll the rough and rugged Tide | Main | FINAL: Get ready, South Beach. The Gators are coming. »

GAINESVILLE -- College football legend Lou Holtz is one of Florida coach Urban Meyer's mentors. Meyer was an assistant for Coach Holtz at Notre Dame and Meyer still leans on Holtz for advice from time to time. I had hoped to speak with Coach Holtz on Thursday for a story that ran in today's paper but the timing was a bit off. You can read the story here, CLICK ME! It ran on the front page of The Miami Herald today. 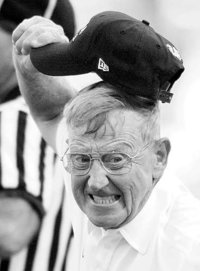 Gator Clause caught up with Holtz on Friday morning to talk about his relationship with Meyer. Holtz also helped Gator Clause breakdown the match-up of Saturday's game between No.2 Florida (11-1) and No.1 Alabama (12-0) and talked at length about UF quarterback Tim Tebow's place in college football history and also Tebow's chances of winning the Heisman Trophy this season.

Gator Clause: What part of your affable personality do you think rubbed off on Coach Meyer?
HOLTZ: [Laughs] Oh, I don't know. Urban has stayed in touch with me. I talked to him two days ago. I go up and talk to him about games and watch him practice in two-a-days and in the spring and I'm going to go up and watching Florida in their bowl preparation as well. It was just like me with Woody Hayes. You take away a lot of things. You learn a great deal about why people do things. But when you become a head coach you've got to be yourself and do your own thing and follow your own philosophy. If he took anything away from me, it would be the Woody Hayes philosophy: fundamentals, getting people to accept their role and work.

We just had a way of approaching the game -- we had a plan to win. When you've been in coaching as long as I have, you have certain things you believe. We would have a discussion [at Notre Dame] and someone would say, 'I think we ought to do this,' and all our coaches would have a meeting and I would make the final decision. I'd listen to everybody once and I'd say, 'No. This is what I'm doing and here's why. Because when I tried to do it this way, here's what happened. This was the result. These are the type of problems you have.' You not only have to educate people on what we did but why we did it. 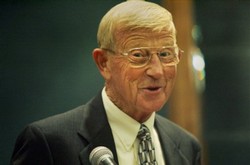 Gator Clause: What do you see different in your coaching and Urban's?
HOLTZ: There's a lot of things I see in him that I really like. He does it better than I ever did it. No.1: Everything starts with fundamentals and toughness. If you don't have fundamentals and you don't have toughness, then you're kidding yourself. You can talk and motivate and do this and that but the basis of any game of football is good fundamentals and toughness, whether you're on the high school level, the college level or the pro level. He does a great job in recruiting but he does a great job in utilizing a person's talents and abilities. I think that's very, very important in coaching. The way he has used Brandon James, for example, as a punt returner, kick returner, running back or wide receiver. How he's used Percy Harvin, whether it be from tailback or receiver. Percy Harvin is one of Florida's leading ground gainers, leading receivers, all-purpose yardage, etc. [Meyer's] got Tim Tebow as a freshman, utilizing his talents and abilities in certain situations. What he has done with Louis Murphy at wide receiver.

But he also lets his coaches coach and he holds people accountable. I think that's a big thing, that his players and coaches are held accountable. As any good leader, whether he's running a business or running a football team, [Meyer] would be very successful.

Gator Clause: You said in team meetings that you would ask all of your assistants their opinions, did you ever get any dissenting opinions from Urban?
HOLTZ: Oh, yeah. Whether it'd be about how a receiver is played, etc. If an assistant who I have great respect for -- and certainly Urban would fall into that category -- if he felt very strongly about something and I wasn't violently opposed to it because my experiences said that wasn't the right way to do it, I would acquiesce to the assistant coach on the way he wanted to do something and what he believed in. Urban was very vocal. 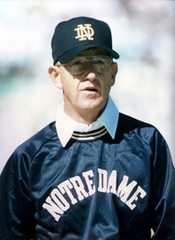 Gator Clause: I know you're probably as interested in this SEC championship game as anybody. What's the one key match-up you're going to keep an eye on?
HOLTZ: I think the offensive line of Florida vs. the defensive line of Alabama. How Florida is going to block Terrence Cody. How they're going to handle the pressure and protect the passer. Alabama has a great defense and a great defensive scheme. I think the other thing that is going to be critical is the two strengths of Alabama. Well, I think they have many strengths. But total defense and offensive line are the big ones. How is Florida's defensive line going to be able to handle the size and the strength of the offensive line of Alabama. Are they going to move? Are they going to stunt? What are they going to do to neutralize that. So, both teams have an awful lot of strengths. Alabama on offense is very methodical. They're very relentless in their ability to run the football. Everything they do is contingent upon their ability to run the football and then that's where John Parker Wilson can then throw the ball. But they aren't the type of team that can just drop back and throw. So, those two match-ups between the defensive and offensive lines of both teams I think will be critical.

Gator Clause: Tim Tebow's place historically in football. Where do you think it stands?
HOLTZ: I think Tim Tebow might be the best leader and best competitor I've seen. Maybe there are some other people I could throw on that list but I can't think of them right now. His speech to the public and to the team after the loss to Mississippi, if they go on to win, that will go down as the same thing, 'Win one for the Gipper.' If they can go on to win it all.

Tebow's stats are not as good as a Colt McCoy or Sam Bradford or even a Graham Harrell but I think his value to the football team, his intangibles, his competitiveness -- what he did against a very good Florida State team in a downpour, in a hostile environment, I don't think you can minimalize his competitiveness. I just think the guy is one of the absolute greatest that has ever played.

Gator Clause: Even though it's a statistical down year for Tebow, do you think Heisman voters will take into account everything you just said?
HOLTZ: Oh, they might not. But if you go back and you look when Archie Griffin won the Heisman as a junior, I think he gained 1,600 and some yards and averaged 6.4 yards per try. His senior year, he gained 1,400 yards and averaged 5.4 yards per try. His senior year, he scored four touchdowns and he won the Heisman again. The reason he won the Heisman again, I think there are two reasons. One, there weren't any other people having outstanding years like there are this year, like a Colt McCoy or Sam Bradford. But the fact that Ohio State went undefeated that year. I think if Florida wins this game, then I think people would have to look at it very, very seriously, his intangibles. 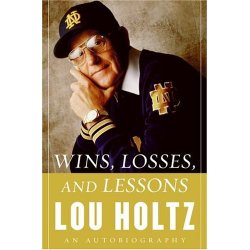 Gator Clause: How's your Heisman ballot shaking out going into this final championship week?
HOLTZ: I think this has been the year of Big 12 quarterbacks. You have Sam Bradford, you have Colt McCoy, you have Graham Harrell. I would not underestimate Tim Tebow's chances to repeat because who are the people outside the Southwest? For example, there is no real Heisman candidate on the West Coast. There's no real Heisman candidate in the Big Ten, although Shonn Greene (Iowa State running back) had an incredible year. There's no real Heisman candidate out of the east. Are the people in the Southwest and the Big 12 area and the people nationally going to divide their ballots and split it between McCoy and Bradford and Harrell? If that's the case, then Tebow might have a better chance than people think.