« RECRUITING: Class of '09 thin at receiver/tight end | Main | Who has better fans: Florida or Oklahoma? »

BIRMINGHAM, Ala. -- In the spirit of the 12 days of Christmas and the eight nights of Chanukah, Gator Clause is breaking down the Gators' 2009 commitment list one position at a time. Yesterday we looked at receivers and tight ends and today we'll highlight the offensive line commitments. 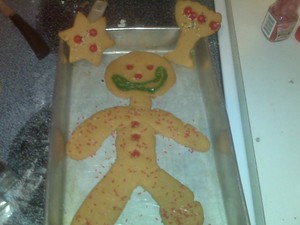 Since we're focusing on the big boys today, it's only fitting that we throw a little food into the blog. The Goodmans made Christmas and Chanukah cookies today before a trip down to the Southside for a basketball game between UAB and FAU.

Back in Gainesville, the Gators' basketball team hosted Georgia Southern and beat the Eagles 88-81. It was a too-close-for-comfort win for UF (9-2). Sophomore Nick Calathes put the game away with a three-pointer with six seconds to play. Georgia Southern is 3-6.

The Gators' football team has received four oral commitments from high school offensive linemen. While other positions will suffer due to UF's limited number of available scholarships this recruiting cycle, the Gators have a done a nice job of replacing their graduating offensive linemen. UF graduates three offensive linemen after the national championship game: tackles Jason Watkins and Phil Trautwein and guard Jim Tartt. Alajajian is set to enroll at UF in a couple of weeks. The Naples High standout should compete for a spot in the Gators' rotation next season. Harrison, a former teammate of UF freshman running back Jeffery Demps, is already well known among his future teammates. The guard watched the Heisman Trophy presentation with the team in UF's Gator Room. Koehne and Halapio will add depth next season.

Florida is in the running for a few more offensive linemen, including Xavier Nixon of Fayetteville, N.C., and Morgan Moses of Richmond, Va. A late commitment from either one of these players would be major news. Both players are ranked among the nation's best offensive linemen.

(Yes, your assumptions were correct. The Goodman's gingerbread man vomited green stomach bile while in the oven. Tragic and disturbing.)