GAINESVILLE -- Once again, the Gators missed the Field of 65 and instead are headed to the NIT. So, how did it come to this? We addressed that question in today's paper. CLICK ME! If anyone hasn't read the game story from Saturday's loss, here's that link as well. CLICK ME! 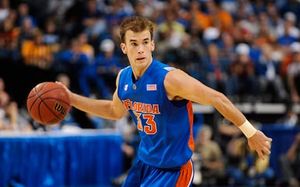 The best thing for Gators fans to come out of Saturday's loss was news that guard Nick Calathes is probably coming back for his junior season.

[PICTURED, Calathes has never played in the NCAA Tournament.]

"For right now, I'm definitely coming back," Calathes said. "But I'll have to wait until the season is over."

So, I guess he left himself a little room to wiggle out of Gainesville. But, seriously, after watching the Gators' late-season collapse, does anyone think Calathes is going to get drafted this year? He should return to school for another season and, as UF coach Billy Donovan likes to put it, "learn how to win."

GATOR CLAUSE TOURNEY POOL
OK, just because the Gators didn't make the NCAA Tournament doesn't mean Gators fans can't enjoy college basketball's championship tournament. I went over to Yahoo! Sports and created an NCAA Tournament group for folks who just can't get enough of the Big Dance. Anyway, the winner will get some

cool BCS national championship swag I've got hanging up in my closet.

[JUMP IN THE OFFICE POOL!]