« Gators get off on the wrong foot in Hoover | Main | Calathes headed for Greece, is UF a program in turmoil? »

No. 9 Florida bounces back, crushes No. 7 Mississippi in SEC Tourney 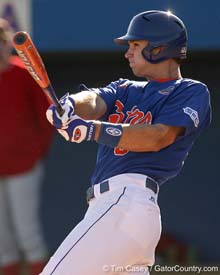 HOOVER, Ala.--Well, the Gators certainly made a statement today.

After coming out flat against Arkansas yesterday in an 8-5 loss, Florida smacked Ole Miss on Thursday, potentially locking up a national seed in the process. The Gators and Rebels are in a hunt for a national seed, and UF got a leg up in that department with its 12-2, eight-inning, mercy-rule-shortened victory.

Right fielder Jonathan Pigott (left) was the man of the hour, blasting two home runs out of Regions Park to finish 2-for-5 with four RBIs and two runs. That made him the first player to drop two bombs in an SEC Tourney game since 2001, and it was particularly shocking considering that Pigott had just two home runs on the season, and Regions Park is larger and tougher to hit home runs in.

Naturally, first baseman Preston Tucker also hit a home run, bouncing one off the foul pole in left field. His three RBIs give him 77 for the year, three shy of the all-time UF record (Ryan Shealy).

Freshman Anthony DeSclafani pitched a great game, going 5.2 innings, striking out three and allowing five hits and two runs. More importantly, Patrick Keating came in to relieve him with the bases loaded, got out of the jam and held the Rebels to two hits in 2.1 innings.

Keating started the year as the team's ace but struggled and was bumped to the bullpen. He hasn't seen a lot of action there lately, but his play today led coach Kevin O'Sullivan to say we should expect to see more of him. That could be a big boost if he can keep pitching well, especially this late in the year.

Now, Florida awaits the loser of the Georgia-Arkansas game at 4 p.m. Friday, and a win would move them a step closer to a national seed. Securing a national seed would give Florida the right to host a super regional in Gainesville. That would be a big deal, considering that UF was 27-8 at home this season compared to 10-9 on the road.