COVER BOYS: Florida a consensus preseason No.1 in football magazines

GAINESVILLE -- The cover of Florida's 2009 media guide says it all: A big No.1 right on the cover. 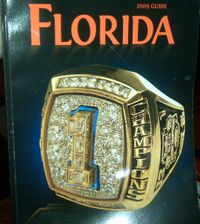 Florida coach Urban Meyer knew this media blitz was coming. Back in the spring he declared that UF's offseason would be so demanding that his players wouldn't have the strength to pick up their preseason magazines and read about how good they're supposed to be. I was going to create a consensus preseason magazine college football poll, but then I did a Google search and found out there are about 100 or so similar consensus polls on the Internet. Here's the best consensus poll I found. If anyone knows of a better consensus poll, then let us know and paste the link in the comments field.

Here's a rundown of what you can find in three preseason mags (Athlon Sports, Phil Steele and Lindy's). You can either go drop $25 at the bookstore, or just read this:

ATHLON SPORTS SOUTHEASTERN 2009 PREVIEW
*One on one interview with UF quarterback Tim Tebow
*Florida's linebackers are the best in the nation, according to Athlon Sports.
*Predicts Florida will play Oklahoma in the BCS national championship.
*Names Tebow as a Heisman favorite: "He won a Heisman Trophy in 2007 and the BCS national championship in title in 2008 and 2006. Tebow could pull the double in 2009 and go down as the most decorated player in the history of college football."
*Tebow, UF defensive end Carlos Dunlap and UF linebacker Brandon Spikes are preseason All-Americans. 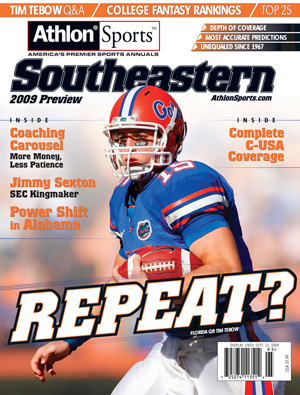 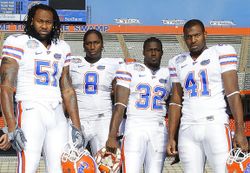 *Athlon Sports on Florida's 2009 offense: "If Florida can figure out its offensive line and find a replacement for Percy Harvin, the offense should be the juggernaut it was last season. But -- this just in -- you don't replace Harvin. So, new offensive coordinator Steve Addazio will have to tweak the offense to figure out how to best utilize Tebow's skills.
*Athlon Sports named redshirt freshman center Sam Robey the Gators' "Rising Star."
*The Gators' key losses, according to Athlon Sports: OL Jason Watkins, OL Phil Trautwein, RB Kestahn Moore, WR Percy Harvin, WR Louis Murphy.

PHIL STEELE'S 2009 COLLEGE FOOTBALL PREVIEW
*Predicts Florida will defeat Texas in the BCS national championship. Phil Steele: "All nine sets of m y power ratings call for the Gators to go 12-0 during the regular season and while I went out on a limb last year calling for them to win the national title, they figure to be the consensus preseason No.1 this year."
*Predicts Florida will play Ole Miss in the SEC championship game.
*Predicts Tim Tebow will win the Heisman. 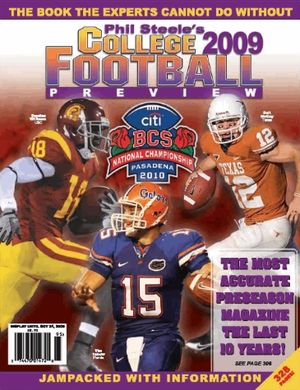 LINDY'S SOUTHEASTERN 2009 PREVIEW
*Predicts UF will win the 2009 national title: "The Gators have the stuff to be one of the best teams of the decade, and the Tim Tebow era could end with him resting at the top of college football's most hallowed pinnacle.
*Lindy's predicted Florida to defeat LSU in the SEC championship game.
*UF quarterback Tim Tebow is Lindy's favorite to win the Heisman.
*Tebow is Lindy's 2009 Most Valuable Player.
*More honors for Tebow: SEC's most accurate passer, strongest passer and coolest player in the clutch.
*Lindy's named UF DE Jermaine Cunningham the SEC's best pass rusher.
*Lindy's Top 10 NFL talent, No.2 Tim Tebow: "Scouts eager to watch his smoother delivery this season." No.3 LB Brandon Spikes: "Do-it-all middle linebacker has all kinds of physical presence." No.10 DE Jermaine Cunningham: "Big-time pass rusher who relies on his speed." 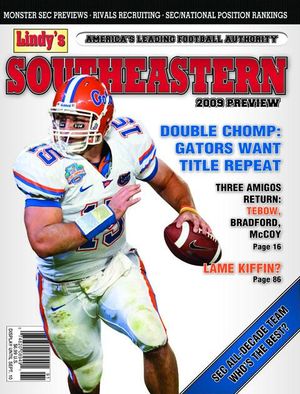 *Bob Tebow on his son's critics, who say Tim Tebow cannot play quarterback in the NFL: "That's hysterical, hilarious," Bob Tebow said. "All the quarterback problems they have in the NFL? He'll be a quarterback in the NFL. It's hard to even comment on it without saying something about the person's intelligence who is making that comment."
*An anonymous NFL scout on Tebow: "Do I think he can play quarterback in the next level? Yes. But it will take a couple of years of work to get him out of the bad habits that Florida's offense has instilled in him."
*Tebow on his critics: "Maybe if I changed the way I played a little bit, they would look at me a little differently. Maybe if I just threw the ball and didn't run and didn't hit people and didn't get excited, they would look at me a little differently. I just use that as motivation."
*Lindy's All-America first team: QB Tim Tebow and LB Brandon Spikes.
*Lindy's All-America second team: DL Jermaine Cunningham and DB Joe Haden.
*Lindy's All-SEC first team: QB Tim Tebow, DL Jermaine Cunningham, LB Brandon Spikes, CB Joe Haden and P Chas Henry
*Lindy's All-SEC second team: TE Aaron Hernandez, OG Mike Pouncey, OG Maurkice Pouncey, DE Carlos Dunlap, S Ahmad Black, S Major Wright, CB Janoris Jenkins and AP Brandon James.
*Quarterback national player ratings, No.1 Tim Tebow: "Anything less than a third title and second Heisman = disappointment?"
*Tight end national player ratings, No.5 Aaron Hernandez: "Ready for stardom after being an injury replacement last season."
*Offensive guard national player ratings, No.6 Mike and Maurkice Pouncey: "Why split them? Mike, Maurkice identical interior forces for the Gators."
*Defensive end national player ratings, No. 3 Jermaine Cunningham: "Any better bookends than Cunningham and Carlos Dunlap?" No.9 Carlos Dunlap: "The defensive Most Valuable Player of last season's national title game."
*Inside linebacker national player ratings, No.1 Brandon Spikes: "His return to the defense was as important as Tim Tebow's to the offense."
*Cornerback national player ratings, No.3 Joe Haden: "Superior speed and skill, and he can still learn more about coverage." No.6 Janoris Jenkins: "Coaches raved about his rapid growth during his freshman year as a starter."
*Safety national player ratings, No.7 Ahmad Black: "Recorded seven interceptions from his strong safety spot last season." No.10 Major Wright: "Nine tackles and a goal-line interception in BCS Championship Game."
*Punter national player ratings, No.4 Chas Henry: "Gators have the SEC's top punter, too? Hardly seems fair."
*Top all purpose national player ratings, No.3 Brandon James: "More than just a pure return specialist ... but he's NFL quality in that regard."
*National unit rankings, backfield: UF No.2, "Florida's top two rushers last season were a quarterback (Tim Tebow) and a receiver (Percy Harvin), but Meyer like his tailbacks enough in the spring to talk about playing some in the I-formation."
*National unit rankings, offensive line: UF No.6, "Having two new tackles isn't optimum, but spring juggling resulted in starting left guard Carl Johnson moving to left tackle, with center Maurkice Pouncey going to left guard. Twin Mike Pouncey is at right guard. All in all, not a bad way to be."
*National unit rankings, defensive line: UF No.1, "Florida has all its starting linemen back from a defense that stuffed Oklahoma, and at least three players have the look of high NFL Draft picks -- DE Carlos Dunlap, DE Jermaine Cunningham and junior tackle Lawrence Marsh."
*National unit rankings, linebackers: UF No.2, "Perfectly pleasing depth comes with ex-starters Dustin Doe and A.J. Jones, and coach Urban Meyer said in the spring he was further slicing up the position because redshirt freshman Brendan Beal and early enrolling freshman Jon Bostic just had to play."
*National unit rankings, defensive backs, UF No.1, "Florida's secondary is dominant. And young. Not a senior among the starters -- or most of the backups -- and it doesn't matter a bit."
*UF's unit rankings in the SEC: QBs No.1, WRs No.3, RBs No.2, OL No.2, DL No.1, DBs No.1, LBs No.2, ST No.1
*Lindy's on UF's chances of usurping the Miami Hurricanes of 2001 as the team of the decade: "Florida has the pieces -- Tim Tebow and a stout defense that returns intact -- to run through the SEC in dominating fashion. The Gators have the star power to eclipse 2001 Miami."
*Lindy's coach of the decade: Urban Meyer is currently No.2 (behind USC coach Pete Carroll) after winning 17 games in two seasons at Bowling Green, 22 games in two seasons at Utah (including an undefeated season) and winning two national titles at Florida. "Let's see ... if Meyer wins another national championship, the decade honor is his."
*Tebow is Lindy's All-Decade first-team quarterback.
*Lindy's lists UF's away game at LSU on Oct.10 as the nation's second best conference game of the season. "These schools have won the past three national championships, and it could be quite a treat if this is just a warm-up for a rematch in the SEC title game."
Lindy's lists UF's home game against Tennessee on Sept.19 as the nation's fifth best conference game of the season. "New UT coach Lane Kiffin popped off about Florida and untrue recruiting violations. How badly will the Gators turn around and pop the Vols in the mouth?"
*Lindy's projected the NFL draft order of the nation's top 50 seniors: No.8 Brandon Spikes, No.11 Tim Tebow and No.47 Jermaine Cunningham.
*Lindy's ranked UF's 2009 recruiting class No.11 nationally and No.5 in the SEC (behind Alabama, LSU, Georgia and Tennessee).
*Lindy's Top 20 incoming SEC recruits: No.6 LB Jelani Jenkins, No.10 WR Andre Debose, No.11 DT Gary Brown, No.17 OL Xavier Nixon.