If ever there was a no-brainer in selecting an all-conference quarterback, then it would be selecting Tebow -- in his senior year, after winning a national championship and an SEC championship -- as the league's top quarterback this season. Tebow was such a shoe-in for first-team offense, you got to think that one coach didn't vote for Tebow just out of spite. (And you'd think coaches would be above all that.) Who's better in the SEC, I ask you? Jevan Snead of Ole Miss? Snead might be drafted higher than Tebow next year but for now Tebow is the best quarterback with the most experience in the SEC. He's the only quarterback with national title rings, for which he has two. He's the only quarterback with a Heisman Trophy.

People are talking about Tebow being one of the best players in the history of college football, but apparently one coach (or maybe more than one, who knows) doesn't think Tebow is the best quarterback in the SEC this season. Does anyone else find this bizarre or at least very intriguing?

Who could it be? Who is the Gator hater? Lane Kiffin at Tennessee? Everyone blames him for everything these days. He has never coached against Tebow, so maybe he doesn't fully respect the player and his 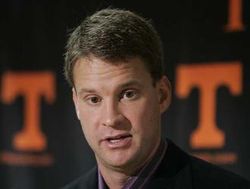 abilities yet. Maybe Mark Richt at Georgia? Nah, got to believe Mark has plenty of respect for Tebow. Maybe it was Ole Miss coach Houston Nutt? Nope. It can't be Nutt because coaches aren't allowed to vote for their own players.

This much I know, we're going to get to the bottom of this. SEC Media Days are next week and I'll be asking every single coach if they voted Tebow to the first team.

A few other things of interest...