GAINESVILLE -- Football previews are in the works here at Gator Clause but before we begin breaking down positions, asking important questions and generally writing fun stuff that every wants to read, the editorial board here at Gator Clause figured it was a good time to assess the University of Florida football team's recruiting efforts. (What a ridiculously long sentence!)

The Gators already have 17 commitments for the class of 2010. According Rivals.com, UF's current group of non-binding oral commitments ranks No.2 nationally. (Texas is No.1.) With that in mind, it's time to reset the Gator Clause Recruiting Big Board and take a closer look at what positions still need to be filled. This blog published its first recruiting projections way back in April.

Florida will likely sign a full class of 25 recruits in 2010. That means the Gators only have eight slots available, assuming there aren't any de-commitments. With many of the Gators' top targets still uncommitted, UF's coaching staff will likely reevaluate its priorities next week before fall camp begins. With so many commitments already on board, the coaching staff has the luxury of being selective. UF coach Urban Meyer already passed on two receivers who wanted to commit, James Louis of Delray Beach Atlantic and Markeith Ambles of McDonough (Ga.) Henry County. Some people got a little upset when Meyer didn't except Louis' commitment. In Meyer's defense, don't hate the player. Hate the game.

Meyer didn't accept Louis' commitment because he's fairly certain that receiver Chris Dunkley of Pahokee is going to be a Gator next season. Another reason Meyer didn't accept Louis' commitment: Dunkley is fast but receiver Solomon Patton of Mobile Murphy might be faster. (People in Alabama tell me that Patton is the real deal and probably among one of the top four or five prospects in the state.)

James Louis is fast but it's more like Ohio State fast than Florida fast, if that makes any sense. Meyer and receivers coach Billy Gonzales are choosy about their receivers. Last year, the Gators never offered Duron Carter, the son of NFL great Cris Carter, because Duron apparently wasn't fast enough. Duron, like James Louis, went to Ohio State. (Of course, Duron is a legacy player at OSU).

All this talk of wide receivers, it only seems fitting that we start off our "Big Board!" with wide receivers. (Numbers indicate the players I think are most likely to sign with Florida come next February.)

THE BIG BOARD!
Gator Clause has narrowed down UF's TOP PRIORITIES to fill out the class of 2010. If Florida lands all of these recruits, then the Gators will undoubtedly have the top recruiting class in the nation next February.

1. Chris Dunkley (5-10, 164) Pahokee TOP PRIORITY
+ A silent commitment to the Gators, if you ask me. Dunkley [PICTURED] recently said on his Facebook page that he is 70 percent sure he is going to be a Gator next season. Will Tennessee's Lane Kiffin swoop down at the last second and steal Dunkley from the Gators? Probably won't commit until National Signing Day.

3. Solomon Patton (5-10, 170) Mobile (Ala.) Murphy COMMITTED
+ Patton apparently is about as fast as Chris Rainey. According to one account by a Mobile Press-Register reporter, Patton ran a 4.36 ... when he was a 15-year-old sophomore.

Quinton Dunbar (6-3, 170) Miami Booker T. Washington LONG SHOT
+ We list Dunbar as a "longshot" simply because UF might not have anymore room (and Dunbar wants to be a package deal along with Booker T. defensive end Lynden Trail). With so many young and talented receivers at Miami and Florida at the saturation point, I'm guessing Dunbar goes to FSU. Personally, I'd make room for Dunbar at UF, go after him hard and cap the 2010 wide receivers at five.

Kadron Boone (6-1, 190) Ocala Trinity Catholic LONG SHOT
+ Will Florida hold a scholarship for Boone? UF might have too many receivers already if Dunkley is indeed a silent commitment.

OFFENSIVE LINE
5. Ian Silberman (6-4, 257) Fleming Island COMMITTED
+ Silberman has been committed to Florida since his sophomore season. He's a future stud if he can stay grounded. 7. Brandon Linder (6-6, 280) Fort Lauderdale St. Thomas Aquinas TOP PRIORITY
+ Linder [PICTURED] is a top priority of the utmost importance to UF, but it's hard to read kids from St. Thomas. Florida has had success in the past -- offensive tackle Marcus Gilbert and safety Major Wright are STA alums -- but other players (OT Sam Young, Notre Dame) have gone out of state. Expect Linder to decide on a school before National Signing Day but be prepared to wait.

8. Chaz Green (6-6, 290) Tampa Catholic TOP PRIORITY
+ Green seems to be leaning towards the Gators after Friday Night Lights. Orr and other commitments are helping recruit Green to UF.

Seantrel Henderson (6-8, 301) St. Paul (Mn.) Cretin-Durham Hall LONG SHOT
+ Henderson is the top-rated prospect in the nation and he'll likely take an official visit to UF. The Gators will have a tough time convincing this player to move so far south, however.

T.J. Leifheit (6-7, 300) Wilmington (N.C.) Hoggard LONG SHOT
+ Florida has had success in North Carolina, so I wouldn't rule out Leifheit making an official trip to Gainesville this fall. Southern Cal seems to be the leader. Leifheit has family in Los Angeles.

10. Mack Brown (5-11, 185) Lithonia (Ga.) Martin Luther King COMMITTED
+ Brown [PICTURED] was one of UF's top priorities for the class of 2010. He's super fast and will be asked to fill the "Percy Harvin position." Brown is rated the No.6 running back prospect in the nation by Rivals.com. Consider Brown a major haul for UF, which has hand trouble landing elite running back prospects in the past.

11. Travon Van (5-11, 200) New Berlin (N.Y.) Milford Academy COMMITTED
+ This guy could end up being the surprise of UF's 2010 recruiting class. He has great vision and his moves are incredible.

TIGHT END
12. Michael McFarland (6-6, 230) Tampa Blake COMMITTED
+ An excellent team player with an athletic body and quick feet. McFarland will fit in well at UF and will wind up being one of Meyer's favorite players.

13. Gerald Christian (6-3, 220) West Palm Beach Dwyer COMMITTED
+ Christian is an elite tight end in the mold of Aaron Hernandez. He catches everything, gives quarterbacks a large target and is a mismatch even for the best defenders. 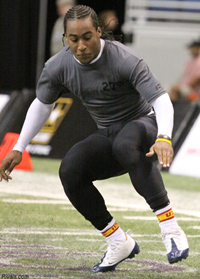 14. Ronald Powell (6-4, 240) Moreno Valley (Cali.) Rancho Verde TOP PRIORITY
+ Powell [PICTURED] is the nation's top-rated defensive prospect, according to Rivals.com and Florida has a chance to lure him away from Southern Cal. Powell visited UF twice this summer for camps and will likely return for an official visit.

Owamagbe Odighizuwa (6-3, 234) Portland (Ore.) David Douglas LONG SHOT
+ The West Coast theme continues with Odighizuwa, who is rated as the nation's No.2 prospect at weakside defensive end. Odighizuwa is being recruited by Dan McCarney and will likely take an official visit to Gainesville this fall. Cal is probably the leader right now but Florida is a close second. When it comes down to it, I'd expect Odighizuwa to stay close to home.

16. Corey Lemonier (6-5, 223) Hialeah TOP PRIORITY
+ Lemonier has offers from every major program in the country and he'll likely be The Miami Herald's top prospect in Miami-Dade County. Florida is near the top of the list but Lemonier is also considering Florida State, Illinois, Tennessee and Auburn. Lemonier says early playing time is important and that's something UF will have a hard time selling.

DEFENSIVE TACKLE
Louis Nix (6-2, 320) Jacksonville Raines LONG SHOT
+ UF is still after Nix even after his friend flashed the Miami 'U' sign at Friday Night Lights and was asked to leave. Nix is currently committed to Miami.

LINEBACKER
17. Gideon Ajagbe (6-2, 197) Coconut Grove Ransom Everglades COMMITTED
+ Prediction: Ajabge is going to be a star for UF. He has the perfect attitude to excel at the next level. He's always working to improve his game. A future team captain with excellent leadership skills, Ajagbe was a great pick-up for the Gators. 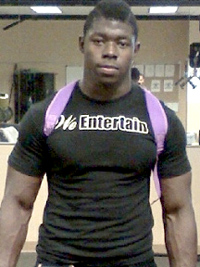 18. Jeff Luc (6-1, 230) Port St. Lucie Treasure Coast TOP PRIORITY
+ UF defensive coordinator Charlie Strong has been glued to Luc's hip for months. If Luc [PICUTRED] commits elsewhere (Miami?), then I'll be very surprised. Rated as the No.1 inside linebacker in the nation, Luc is the type of player coaches build a defense around. Ajabe of Coconut Grove Ransom Everglades has been recruiting Luc for UF.

Jordan Hicks (6-2, 210) West Chester, Ohio LONG SHOT
+ Hicks is rated as the No.1 outside linebacker in the nation by Rivals.com. He has narrowed his list to five schools and UF made the cut. That likely means Hicks will take an official visit to Gainesville this fall. Other schools in the mix are Alabama, Ohio State, Southern Cal and Texas. Talk about an impressive top five. Gotta assume that OSU is the leader.

Khairi Fortt (6-3, 230) Stamford, Conn. LONG SHOT
+ Fortt is the No.2 outside linebacker in the nation, according to Rivals.com. He's a long shot but Florida already has one Connecticut native on its roster (tight end Aaron Hernandez). 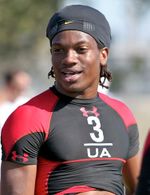 19. Demar Dorsey (6-1, 175) Lauderdale Lakes Boyd Anderson COMMITTED
+ Dorsey [PICTURED] is one of the fastest kids in South Florida. He's committed to UF but the Gators should be prepared to battle other schools (Miami, Florida State, Tennessee) until the bitter end.

20. Victor Hampton (5-11, 170) Charlotte (N.C.) Independence COMMITTED
+ Hampton committed to the Gators without visiting the school. He's a solid verbal commitment but there's plenty of time for other schools to make a move.

21. Jaylen Watkins (6-1, 172) Cape Coral COMMITTED
+ Watkins was a star at Friday Night Lights. He's a tall cornerback with above-average speed for the position. Probably the most likely of the cornerbacks not to remain committed to UF.

22. Cody Riggs (5-8, 156) Fort Lauderdale St. Thomas Aquinas TOP PRIORITY
+ Riggs named Florida his top school after Friday Night Lights. He had been favoring Georgia for months. The No.4-rated cornerback in the nation, according to Rivals.com.

Lamarcus Joyner (5-8, 166) Fort Lauderdale St. Thomas Aquinas LONG SHOT
+ Don't close the door on Joyner just yet. The No.2-rated cornerback in the nation is a long shot but the Gators will be in his ear until National Signing Day.

23. Matt Elam (6-0, 205) West Palm Beach Dwyer COMMITTED
+ One of the top prospects in the nation, Elam [PICTURED] has a long-standing relationship with Meyer. Elam will take his visits this fall but should end up signing with Florida on National Signing Day.

24. Jonathan Dowling (6-3, 178) Bradenton Southeast COMMITTED
+ One of the most talented high school safeties in the state. Dowling is a solid commitment.