"If he is Superman -- make that Batman, then I am Robin," Berry said. "That's a big compliment coming from him. He's a Heisman Trophy winner, has won national championships. What more can you say?" 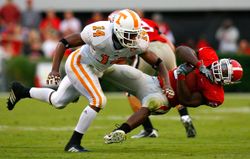 What's this, you ask? Something other than disdain and verbal vomit coming from one of the warring factions of the UF-UT rivalry?

Leave it to the players of Florida and Tennessee to show respect for one another. The coaches of either school are much too competitive for such triviality.

Tebow and Berry are well acquainted. As a freshman, Berry intercepted Tebow and returned it 96 yards for a touchdown. Last year, Tennessee's defense held UF to 243 yards of total offense (by far a season low for UF). Considering that statistic, some might question why the Golden Nugget out in Vegas set the early betting line for this season's UF-UT game so high. UF is going to be good and Tennessee has a new coach and a new defensive coordinator, but UF plus-27? I know Tennessee isn't expected to be much of anything this season other than a trusty dog every week, but a four-touchdown dog?