GAINESVILLE -- Florida Gators receiver Paul Wilson recently broke his foot during preseason football practice and has been advised by team doctors to end his football career, according to UF coach Urban Meyer. 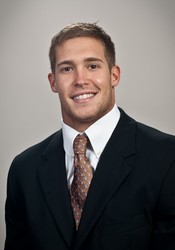 Meyer said on Friday that UF will honor Wilson's scholarship. Florida is in the process of filing a medical hardship waiver on behalf of Wilson [PICTURED], according to a team spokesman. Wilson, a redshirt sophomore from Lakeland, broke the same foot last September and had surgery.

"He probably won't play football again," Meyer said. "I was counting on him for special teams. He's had some tough injuries. He's had the wrist issue. He's had a couple leg issues. He's a great kid."

A member of the Lakeland Dreadnaughts 2006 national championship football team, Wilson re-broke his foot during non-contact drills, according to Meyer.

"The foot that broke, re-broke because of what receivers are asked to do, which is plant and push off," Meyer said. "He has been advised not to play football. We wish him all the best and obviously we're going to pay for his school. That's real tough on him because he wanted to play.

"You hate to say it like this, but it's true. There are certain kids you just like better than others," Meyer said. "You don't want to say that, but it's true. The guys who put in the hard work, go to class, live right -- all the things Paul Wilson does -- a guy like that deserves to live his dream."