GAINESVILLE -- Florida Gators senior receiver Riley Cooper is back with the team but that doesn't mean a starting position is guaranteed. 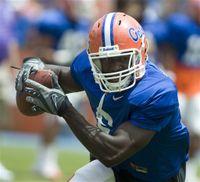 Cooper lined up with the second team on Thursday morning in his first practice with the football team in eight months. While Cooper was away playing baseball, receivers Deonte Thompson [PICTURED], Carl Moore and David Nelson moved into the starting line-up. Cooper, Thompson, Moore and Nelson will now battle over the next three weeks for playing time and starting positions.

Cooper said on Thursday that he's not worried about losing playing time this season.

"I don't know about Deonte [Thompson]," Cooper said. "I can tell you about myself. I'm not worried about that at all. I'm just going to go out there and try to do what I do. I'm not going to change nothing. I started 14 games last year, so I don't think I need to."

Chronic pain in Cooper's feet (turf toe) has always been a problem and he said on Thursday that he recently had an MRI. Cooper, who considered quitting school this summer to pursue a career in professional baseball, was urged by quarterback Tim Tebow to return to the team. But Tebow said on Thursday that just because Cooper is back doesn't mean that his friend and roommate is a starter.

"You're not going to have a job just because you had one last year," Tebow said. "You got to come and compete and that's what he wants -- that's what everyone wants. So, who plays and goes out there and starts it's because they had a good fall camp and they came and they competed and worked hard and they earned it.