The game that almost was? 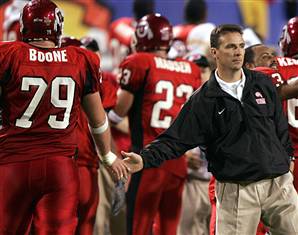 When you're in The Swamp or at home watching 73-point (okay, 63-point) favorite Florida beat poor Charleston Southern like a rag doll on Sept. 5, think about this:

UF toyed with the idea of playing Utah instead.

Urban Meyer said Saturday that the idea came up to host the Utes ("Well, we weren't going to go to Utah," he laughed) instead of Charleston Southern to open the season, but it fell through.

"I was not knee-deep in that," Meyer said. "That was [athletics director Jeremy Foley's] idea, and I think ESPN and all that. [Utah coach Kyle Whittingham] is one of my closest friends, and it was kind of exciting, but somehow they couldn't get everything worked out."

Meyer said he doesn't have a lot of input in the scheduling process, but he was asked about it and agreed. He added that he thinks the Gators will face Bowling Green, another of his former schools, in the coming years. Miami of Ohio, USF and Appalachian State are all heading to The Swamp next season.

The Utes finished No. 2 behind Florida last year, and are ranked No. 19 in the newly-released AP poll. They would have made for the most exciting non-conference game the Gators have played in quite some time, not including FSU and Miami, of course. This year, Utah could arguably have presented as much or more of a challenge than the Hurricanes or Seminoles--they definitely would have last season--and I wish we could have seen that.

However, there is really no reason for Florida to go looking for these games. The Gators don't need the help right now, but this might be a good idea in a few years when they aren't hands-down favorites to win it all.

What do you think? Want to see Florida schedule a team like Utah in the coming years? Want to see them go on the road for a change? Or do you want to keep slapping around these patsies and wait for the SEC competition?

At the end of the day, it's on the players to deal with whatever comes there way. I asked defensive tackle Terron Sanders what he'd like to do after Meyer's comments today.

For your Saturday enjoyment: